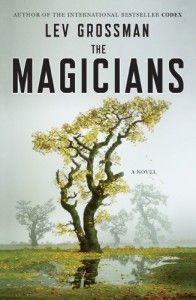 Much fuss has been made about The Magicians, the first foray into the Fantasy genre by Lev Grossman, uber-geek, author of Codex and Senior Writer for Time magazine. The most ironic of all? The book is not being marketed as a genre novel, but rather being shelved in the Literature section at most bookstores, despite being a Fantasy novel (full of every cliché in the book) through and through.

The thing is, though, The Magicians is a good crossover novel, bridging the gap between Literature-with-a-capital-L and Fantasy, by taking the usual tropes (magic school, dysfunctional band of misfits, wizards, ‘You’re a wizard, Harry’-moments, fireballs, etc…) and throwing in all that stuff the literary folk like (sex, moral ambiguity, cocaine and whiskey, cancerous relationships, etc…). The Magicians is like Harry Potter meets The Graduate, with a little bit of Trainspotting thrown in for good measure.

Of course, general debauchery and acidic characters aren’t a magical fix-all, able to turn any Fantasy novel into a work of literary genius; but Grossman is aware of this and uses these uncomfortable literary devices as an avenue to tell a sometimes funny, sometimes painful story of young people growing up in a world they hardly understand. Like Trainspotting, The Magicians is all about Quentin’s inability to cope with the trials and travails of real life, and his constant search for Fillory, a magical world that Quentin knows will solve all his problems. As most of us know, though, finding that place rarely solves anything, rather it’s often a slippery slope, leading to bigger and more serious problems.

Like anyone dealing with the pains of growing up, of having distant, ambivalent parents and friends whose true intentions are often muddy, Quentin is full of his own shortcomings and dichotomies. He’s a brilliant, troubled man, searching as much for himself as anything else, and makes some bad decisions throughout the course of the novel. Midway throught the novel, Quentin is let loose into the world with little direction, near limitless access to money and drugs, and all his relationships falling to pieces around him. This period of the novel was difficult to read, as Quentin becomes unlikable and brash and confused, deserving little sympathy from the reader. Like reading The Chronicles of Thomas Covenant, the Unbeliever, the reader often wonders why they should even bother reading on, if there are any redeeming qualities left in Quentin. Like Donaldson, though, Grossman is very deliberate in this emotional breakdown of his protagonist, and it plays an important role in Quentin finding the motivation he needs to remove himself from the downward spiral.

When Quentin is finally introduced to the land of Fillory, much later in the novel than expected, it’s as much a breath of fresh air for the reader as it is for Quentin and his friends. Desperate for a change, for a purpose in his life, Quentin embraces this newfound adventure and jumps in head first, expecting all of his problems to be solved. Like any wonder drug, Fillory is not what it seems, and certainly not the land he remembers from his childhood stories. As frustrating and unlikable as Quentin becomes, I couldn’t put the novel down. I became as addicted to Quentin’s search for answers as he was.

The main knock on The Magicians is that it’s little more than a rip-off of Harry Potter and The Chronicles of Narnia, just given a fresh coat of angry red paint. This is true, in every way. Rather than hurt the novel, though, Grossman turns this into a strength by playing with the cliches and expectations set by the reader familiar with the works of Lewis and Rowling. The ‘Harry Potter’ aspects that make up the first two-thirds of the novel are much stronger than the ‘Narnia’ aspects, but this isn’t your little brother’s Harry Potter; rather it’s a sex and alcohol fuelled binge that will hit way too close to home for a lot of people. Imagine Harry Potter with a line of coke, a tumbler of bad whiskey and a cigarette burning to ashes in his hand. Oddly, despite being relieved by the change brought about in Quentin, the story loses some of its steam once the narrative shifts from our world to the storybook world. Fillory comes and goes so fast that I wondered whether it wouldn’t have been left better as an analogy for Quentin’s quest for answers, rather than an actual plot device. In the final third of the novel, the story goes from feeling like a nicely self-contained character-piece to a prologue for a much larger, more typical man-from-our-world-finds-magical-world story.

In a novel that would be so easy to dislike (whether because of the familiar stories being told, or the often hard-to-like characters), Grossman refuses to let the go by crafting characters that, though you may always not like them, you certainly recognize them. In them you see your friends, you see your family and you see yourself. One shining light in Quentin’s life, and for the reader, is Alice, a young wizard who rarely falls into the caustic lifestyle of her peers. I’ve perhaps been hard on the cast, but they are often as equally charming and funny as they are hard to get along with, thanks to Grossman’s sharp prose and clever dialogue.

Brakebills, the magical school that Quentin attends, lacks the depth and charm of Hogwarts, and Fillory, despite being almost a carbon copy, certainly doesn’t touch Narnia‘s place in the Fantasy-world pantheon, but that’s not what Grossman was aiming for. The Magicians is a novel where pop-culture references, binge drinking, internal struggles and the trials of friendship are more important to the narrative than talking Lions, broomstick sports, religious analogies or Death Eaters.

If it seems I’ve been hard on the novel, consider this: The Magicians is my favourite novel of the year. The characters are flawed and realistic, eliciting real emotion out of me, rather than telling me what fake emotions I should feel. The Magicians excels as a crossover novel because of its uncompromising nature, its ruthless insistence to deal with real world issues and its ability to use the Fantasy trappings as a setting for the story, rather than a reason for the telling. Grossman balances the sorry side of life by also revealing those genuine moments that often occur between friends. The Magicians is a multifaceted exploration of growing up, and, as Quentin learns, bringing down the Dark Lord is rarely as important as the journey to get there.