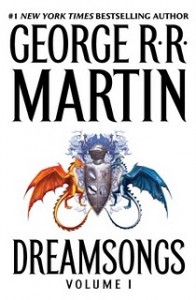 Prior to releasing A Game of Thrones, and subsequently becoming one of the brightest and most respected authors in the Fantasy field, George R.R. Martin was perhaps best known for his short fiction, much of it in the Science Fiction genre, and a far cry from his current bread and butter. Foremost among those is Sandkings.

He flew his skimmer to Asgard, a journey of some two hundred kilometers. Asgard was Baldur’s largest city and boasted the oldest and largest starport as well. Kress liked to impress his friends with animals that were unusual, entertaining, and expensive; Asgard was the place to buy them.

This time, though, he had poor luck. Xenopets had closed its doors, t’Etherane the Pet seller tried to foist another carrion hawk off on him, and Strange Waters offered nothing more exotic than piranha, glow sharks, and spider squids. Kress had had all those; he wanted something new, something that would stand out.

Near dusk he found himself walking down Rainbow Boulevard, looking for places he had not patronized before. So close to the starport, the street was lined by importers’ marts. The big corporate emporiums had impressive long windows, in which rare and costly alien artifacts reposed on felt cushions against dark drapes that made the interiors of the stores a mystery. Between them were the junk shops-​narrow, nasty little places whose display areas were crammed with all manner of off world bric-​a-​brac. Kress tried both kinds of shops, with equal dissatisfaction.

Then he came across a store that was different.

Set in the far future city of Asgard, Sandkings tells the lamentable story of playboy Simon Kress, a man ruled by passions, but lacking in wit. Kress is a purveyor of exotic (and dangerous) animals, which he uses to entertain his guests at parties. A lonely attention whore. To this end, he acquires four sets of Sandkings – rare, insect-like hiveminds drawn to tribal warfare and worshipping their owner, all within the confines of a large aquarium. Just imagine being a kid and watching your pet turtles, or the ants in your ant-farm, war with each other over land and food. They promised to be the crown jewel of Kress’ collection.

Martin’s strength of creating characters you hate, yet understand at the same time, a hallmark of A Song of Ice and Fire is evident even in his early short fiction. Sandkings follows Kress’s travails as he raises the sandkings, cruelly using them to his amusement, wading into an addiction to the popularity they bring him. In a remarkably short space, Martin manages to make Kress both despicable, but interesting and likable at the same time. As the reader, we can see all the mistakes the man makes, but, equally, we understand his reasoning for making them. It all comes back to that loneliness, that cry for attention.

Martin’s A Song of Ice and Fire is known for its uncompromising twists and turns, for setting up plot twists hundreds of pages in advance, but only clear to the reader upon reflection. Sandkings is no different, and shows the roots of the storytelling that would go on to make Martin famous and rewards the reader with a cruel twist ending, that leaves several juicy questions to gnaw on.

Equally viable as a horror story and a psychological profile of the downfall of a greedy, lonely man, SandKings is an absolute pleasure to read, and justifies those that claim Martin’s true strength lies not in his Epic Fantasy but in short fiction. Speaking also to its quality is the fact that despite being published 30+ years ago, the story holds up to every one of its contemporaries, with not a wrinkle or liver spot to be seen. If you’ve only read Martin’s A Song of Ice and Fire, or haven’t read anything by Martin at all, do yourself a favour and pick up Dreamsongs Volume I & II, and discover Sandkings, and the other roots of one of the most compelling storytellers of our generation.