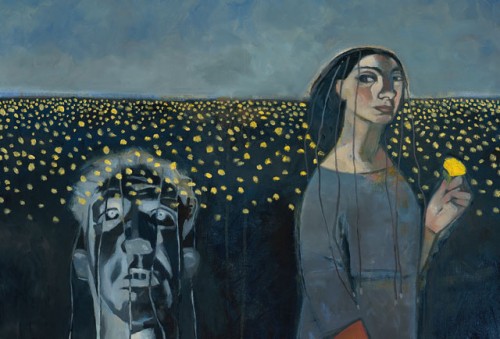 “Do you suppose it’s possible to murder God?”

Gretel was Gottlieb’s most troubling patient. She was clairvoyant. She was also, he feared, quite mad.

He paused in the midst of jotting a note in her file. Capping his fountain pen and setting it on the desk, alongside the blotter, gained his scattered thoughts a few seconds to catch up with her. “I beg your pardon?”

“If He is omniscient and infallible, then surely He would see the moment and manner of His own passing. Knowing this, and being infallible, He could prevent it. Yet to do so would imply His prescience was imperfect. While not doing so would mean He is not eternal.” She sighed.

Gottlieb said, “The death of God is a metaphor. It isn’t meant as a literal, corporeal death. It represents the overthrow of God through modern man’s diminished need for external sources of wisdom.”

Nietzsche was required reading at the farm. But only the approved works, of course.

One of the more prominent debuts of the year is Bitter Seeds by talks about What Doctor Gottlieb Saw and its relation to Bitter Seeds:

“What Doctor Gottlieb Saw” takes place roughly 18 months before the events in Chapter 1 of Bitter Seeds. (So it takes place maybe 17 years after the prologue, which you can read for free here.) I wrote it entirely as a standalone, so it doesn’t require any foreknowledge of Bitter Seeds.

For people who have read the book, the story might shed a little more light on the relationship between a certain flying man, and a certain perfectly innocent girl who likes to pick flowers and who just happens, maybe, to see the future.

The central incident that drives this story forward has been in my mind for a long time, as a central piece of Reichsbehörde mythology. It’s referred to, very quickly and in passing, near the end of Bitter Seeds.

There are so many stories I’d like to write in the Milkweed universe– so many bits and pieces of the world that I’d love to explore in short form. What happened that night at the Bodleian? Who discovered Enochian?

The story I’m really dying to write is a companion piece to “Dr. Gottlieb”, which takes place between Bitter Seeds and The Coldest War. But I’ll refrain from saying more about that, as a courtesy to folks who haven’t read the book.