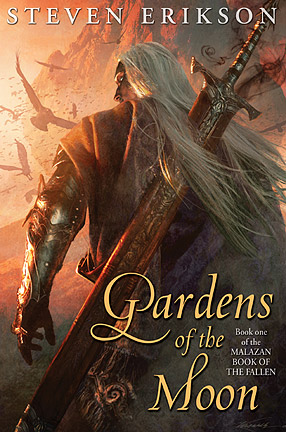 GASP! That would be me, coming up for air. How long was I down there? About twenty years, from conception to completion. The Malazan Book of the Fallen is done. Sure, editing and all that crap to follow. But … done. I don’t know who I am. Who am I again? What planet is this? Three months of butterflies … maybe this double whiskey will fix that. Hmm. No. Delayed reaction going on here.

He’s been working on the damn thing for nearly as long as I’ve been alive! For Malazan fans, and the Fantasy genre as a whole, it’s a pretty monumental achievement. Now, whether he’ll wrap it up in a satisfying manner remains to be seen (given the flagging opinion of the later books in the series), but either way, he’s certainly proved to be prolific, publishing near a novel a year (at 900+ pages, no less). Hell of an achievement.