A few weeks ago, I made a post about Patrick Rothfuss and his drive to raise money for Heifer International. Well, the results of that fundraising is in an it’s looking mighty successful indeed!

On December 9th, I mentioned on the blog that I thought we had a decent chance of breaking $40,000. Then, we raised over $16,000 in the next two days, tearing past $50,000 and leaving me worried that I was going to have to take out a loan so I could cover my half.

A big piece of this was brought about by folks spreading the word on their blogs. Most notably, Neil Gaiman.

I’d heard through the grapevine that Gaiman was a bit of a Heifer supporter, so I sent him a little e-mail, asking if he’d be interested in mentioning it on his blog.

I should have realized that asking for something like this would be like sticking my tongue into…. well… into anything, really. In my experience, whenever you stick your tongue into something, the outcome is going to be either very exciting, very dangerous, or both.

This was one of those “both” situations. After his blog, Gaiman’s readers flooded over to participate in the festivities. Felicia Day mentioned it on her blog too. Plus, I know a lot of folks were finishing their own personal fundraisers and/or waiting until the very end to make their donations. Hence the crazy. 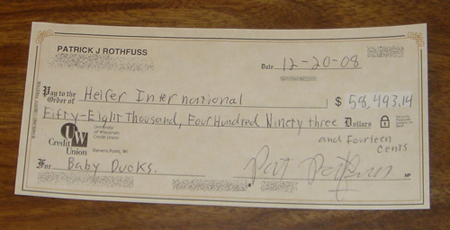