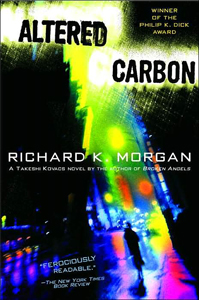 In the six or so short years since Richard Morgan hit the SF scene, he’s become synonymous with hard edged Science Fiction. Hell, he is probably one of the sole reasons that ‘gritty’ has become such an overused descriptor in the SF publishing universe. He made further waves earlier this year when he took the leap from Science Fiction into Fantasy with the release of The Steel Remains. Wanting to see what all the fuss was about, I decided to go back to the source and start with his debut novel, Altered Carbon.

Immediately I was struck at how evenly Altered Carbon delivered a mix between hard edged Science Fiction and a dusty old detective novel. As with any good first person narrative driven novel, the strength of Altered Carbon rests on the shoulders of its main protagonist and Takeshi Kovacs (not pronounced KOE-vacs, but rather KOE-vash, if you know what’s good for you) more than delivers. On the surface he’s a hardened killer, straight out of the future’s version of prison, and simply bent on doing what he needs to to survive. Over the length of the novel, though, Kovacs grows through Morgan’s brisk, evocative prose and shows more layers than I ever expected of him.

Being an outsider to the world, a fugitive from a planet called Harlan’s World, is the perfect excuse to introduce the reader to the world and the science in a believable way. At the outset of the novel, Kovacs has been in confinement for a number of years and life has moved on greatly in that time. Kovacs is as unfamiliar with many aspects of life on Earth as the readers are and Morgan uses that fact to great effect.

Speaking of the science, Altered Carbon’s biggest ‘gimmick’ is the ability to transplant human consciousness from one sleeve (a fancy name for an unoccupied body, generally that of a criminal in digital confinement) to another. The morality issues aside, of which Morgan doesn’t shy away from, this ability to jump between bodies gives Morgan a lot of leverage to throw twists and turns at the reader. Hell, the whole story is based on a rich megalomanic trying to solve his own murder.

With Altered Carbon, Morgan earned his ‘gritty’ moniker fairly. Loaded with sex, violence, crude language and heavy drug use, Morgan’s debut novel surprises the reader in a different way â€“ instead of it all feeling gratuitous, Morgan’s use of the darker elements of human nature are carefully crafted elements of plot and character. The sparing sex scenes are explicit, but are never used for their own purpose, instead extending the objectives of the characters; the violence is visceral, but Morgan’s version of our future would feel bereft without it; drug use, and its manipulation of the human psyche, are integral to the plot and are certainly never glorified. Along with Joe Abercrombie (author of the First Law Triogy) I can think of few authors who handle the down and dirty aspects of SF more deftly than Richard Morgan.

At its heart, Altered Carbon is a murder mystery, despite its hard edged Science Fiction elements, and the plot twists and turns satisfyingly, at least until the ultimate questions start being answered near the end of the novel and I couldn’t help but feel that they weren’t as satisfying (or as shocking) as I’d hoped they be. Kovacs, who survives life as a mercenary as much by his quick wit and silver tongue as by his strength of arms, has an alarming penchant for epiphanies, often leading to unlikely developments in solving the case. Some might brush these epiphanies off as a product of Kovacs experience and street smarts, but Morgan uses the device a few too many times to the point where it started to feel like some things fell into place much too easily for the protagonist.

Altered Carbon revolves around a small group of main characters, all of whom bubble with personality, and a larger cast of secondary characters who pop in and out of the story seemingly at random. There were several times over the course of the novel where I had to flip back a few hundred pages just to remember who these people were when they finally became relevant to the plot again after having disappeared for a large chunk of the narrative. No matter who he was interacting with, though, Kovacs is charming in his gruff nature and charismatic in a bad boy kind of way. Morgan’s effective and sharp dialogue move much of the story along and keeps the reader on their toes as much during a shoot out as during a heated interrogation or a simple sexually charge conversation.

Altered Carbon, being my first exposure to Morgan’s work, wasn’t exactly what I was expecting. What I thought to find was a novelized version of Universal Soldier and instead was rewarded by a thoughtful, morally complex mystery novel that effectively uses the futuristic setting and ideals as a device to keep the reader guessing and connected to the characters. Richard K. Morgan earned his reputation with Altered Carbon, and a well deserved reputation it is.