David Anthony Durham, author of Acacia: The War with the Mein, sent me the beautiful cover for his upcoming novel, The Other Lands, the second novel in the Acacia Trilogy. 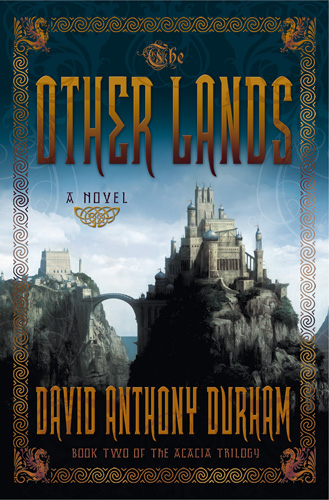 Also included was a synopsis of the novel:

The apocalyptic struggle against the conquering Mein now won, Queen Corinn rules over the Acacian Empire of the Known World with a stern hand—aided by increasing mastery of the occult powers contained in the Book of Elenet. But far across the seas the mysterious inhabitants of the Other Lands seemingly control the fate of her empire—supported as it is by an underground trade in drugs and slaves. When she sends her brother Dariel on a secret mission across the hazardous Grey Slopes to investigate, it begins another cycle of world-shattering and shaping events.

I loved Acacia: The War with the Mein and cannot wait to get my hands on The Other Lands. Durham says he’s just putting the finishing touches on the manuscript and that a Septermber release is looking likely!