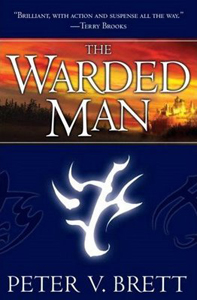 When Peter V. Brett’s The Warded Man was first released in the UK last year (under the much superior title of The Painted Man), it started garnering a considerable amount of buzz, some even going so far as to call it the best debut novel since Patrick Rothfuss’ The Name of the Wind. Doubly impressive when you consider that The Warded Man is steeped in the values of light, traditional fantasy, a sub-genre much maligned by many of the Internet’s pundits.

The blurb on the back cover marks The Warded Man as pretty standard fare – demons rising from the night, world in danger, young protagonists setting out to save the world – but from the early pages it’s clear that Brett is determined do something different in the world of traditional fantasy.

The Warded Man is very much a character driven novel. Divided up between three point-of-view characters – Arlen, a scarred young man with a determination to rid the world of the demons; Leesha, a skilled healer, dealing with the troubles of growing up a woman in a dangerous, male dominated society; Rojer, an orphaned musician who can’t seem to catch a break – The Warded Man covers a span of roughly 15 years, travelling with these three as they grow to adulthood in their treacherous world. Each of the three bring their own view of the world and, unusual for a novel with multiple viewpoints, I didn’t find myself favouring any of them, happy enough when any of their storylines were picked up again. What was more unsettling, however, was that Brett seemed to miss an opportunity to evolve their narrative as they grew – the prose varies from character to character (enough to give them each a voice) but changes little between the beginning of the novel (when they are very young, Rojer especially) to the end (when they are, more or less, adults).

Unlike most Epic/Traditional Fantasies, much of The Warded Man takes place in the warded villages and cities that scatter the land, safe havens from the demon attacks that occur every night. With no quest to drive the story forward, Brett relies on the interesting personal narratives of each character and offers enough variation that, even though action is slim (outside of Arlen’s story arc), the pace of the novel never suffers. In fact, many times I felt like I was reading a sub-plot from a Robert Jordan novel – the scope was smaller, just another piece in the overall mosaic of world events, but with enough hooks to give glimpses of how the world was going to change because of the actions of these nobodies.

With Arlen, arguably the lynchpin that ties the story together, Brett seems to be tackling the makings of a hero. Similar to what Rothfuss is doing in his Kingkiller Chronicles, Brett seems to be pulling back the curtain on how the tough decisions made by a normal person can often lead to big, world-changing events and, eventually, to the creation of legend. It’s startling, and Brett leaves enough uncertainty about Arlen’s fate and the meaning of his transformation that I was eager to delve deeper into the psyche behind the decisions he was making. Watching him grow from a battered youth to a fierce warrior gives the reader a perspective on his character that few other novels in the genre can match.

Though it will likely never reach the depth of something like Steven Erikson’s Malazan novels, The Warded Man shows the beginnings of some interesting world building. Each of the major cities are distinct, feeling vibrant and alive; the small villages are equally as interesting, with culture and politics of their own and many of the minor villagers have enough of a personality and effect on the main characters as to be memorable. One area that irked me, though, was Brett’s attempt at creating unique ‘fantasy-ish’ names: Stefny, Jeph, Arrick, Jaik – these obnoxious misspellings of names from our world distracted me to no end.

Brett takes an interesting turn with regards to magic with his creation of a ward-based magic system to fend off attacks from the demons. Unlike most fantasy novels, the ‘badguys’ do not sulk around in the shadows, waiting for their chance to strike (well, at least in a metaphorical sense), but instead have ruled the land for hundreds of years, striking fear into the humans and cowing them into hiding behind their warded walls as night falls. Rather than being caught up in something he is unprepared for, Arlen brings the fight to the demons, desperate to find a way to change the fate of his world. This twist on formula kept things fresh and the sacrifices that Arlen makes as he grows up are startling and very real.

Liquid prose moves the story at a quick pace and Brett leaves behind the heavy handed description that plagues so many Epic Fantasies, instead painting a few brushstrokes to set the scene and letting the reader fill in the gaps themselves. Strong dialogue helps define the characters and is used to effectively drive along the plot of the novel while spilling glimpses at the history of the demons and the ward magic.

Though The Warded Man is clearly laying the foundations of a much larger story, it stands on its own admirably, completing the story-arcs of the three protagonists while leaving the door open for further adventures. It’s clear that Brett still has many cards up his sleeves and I’m fully confident that we’ve barely seen anything yet; already Brett promises that we’ve only scratched the surface of Demon culture. The most interesting part of the novel, Arlen’s adventures in the desert kingdom of Krasia, bodes well for the sequel, The Desert Spear, which follows a couple of the minor characters from this region and promises to spread light on one of the more shocking twists of The Warded Man.

As debut novels go, Brett’s The Warded Man stands among the best. Confident and subtle, The Warded Man brings back memories of the best fantasy of the ’80’s and early 90’s – rip-roaring adventure, fantastic creatures, and characters you want root for. An accomplished debut, The Warded Man promises that one day Brett might very well lay claim to the throne once ruled by Raymond E. Feist, Terry Brooks and Tad Williams.