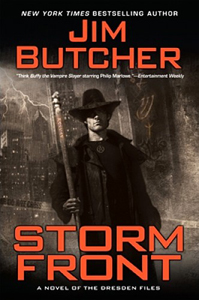 Blame my girlfriend for this review, for I didn’t make up my mind about Jim Butcher’s debut novel, Storm Front, for myself, she did. The conversation started while we were laying in bed, with me debating whether I should jump into the sequel, Fool Moon or another novel, by a different author.

‘You must really have loved that book,” she said.

‘That book, with the Wizard, you loved it.”

‘Sure. You haven’t stopped talking about it since you finished yesterday.’

I thought about it for a second and realized she was right. I had been talking about Storm Front almost non-stop since the day before, when I hadn’t even finished it yet. I didn’t really realize it, but I did love Storm Front despite the problems it had. And you know why? It’s just plain, ol’ fun.

Butcher’s name has become synonymous with Urban Fantasy and, for better or for worse, his first novel encompasses everything that readers either love or hate about the sub-genre: vampires, supernatural crime, murders, cheesy one-liners and even a smattering of magic. Storm Front is a mystery novel wrapped up in a fantasy veneer. Harry Dresden, modern-day Wizard, is damn likable and has just enough mystery (his past only hinted at in Storm Front) to keep the reader compelled. I was drawn to Harry not because he was a perfect, ass-kicking hero, but because he was a guy trying to get by, to hide from his past and scrape out a living doing what he knows best: magic.

While the mystery plot is predictable (the connections between the two cases are clear nearly from the get-go), the characters and their relationships are what move the story along. Though most of them are clichés (sly mob boss, angry female cop, damsel in distress), the relationships that develop lifts them into the territory of being interesting. I particularly enjoyed the back and forth between Dresden and Karrin Murphy, his liaison at the police department and lead investigator on the murder case – there was just enough chemistry there, just enough tension in their working friendship, to feel believable and the consequence of some of Dresden’s choices near the end of the novel were more powerful for the relationship built in the early pages.

Storm Front began life as a project for a writing class, and this origin is evident in Butcher’s prose. Though the pace is breakneck and the dialogue is witty, much of the writing feels loose and lacks confidence. The most obvious example is the scattershot approach to harsh language – at one point in the novel, Harry says,

And maybe Dragons would fly out of my butt.

As mentioned earlier, though the mystery itself is somewhat predictable, it unfolds at a nice clip and has some decent twists late in the novel, but certainly wouldn’t have been enough to carry the novel without the charismatic characters and easy-to-read prose – Elizabeth George or Agatha Christie this is not. Unlike many novels of the Urban Fantasy sub-genre, Storm Front never takes itself too seriously. Dresden himself helps, possessing a rather dry take-it-as-it-comes attitude, and it is clear that Butcher was having fun while writing. The pace of the novel is breakneck and reads almost like a novella, rather than a full length novel. I finished it in a couple of days, which is a rarity for someone who reads as slowly as I do.

The magic system itself is a little hit-or-miss. I liked the idea that the power for the magic is drawn from emotion within the caster, their need and the natural energy of the environment, but was put off by the typical use of Latin phrases to launch the magic. Refreshingly, Harry is limited in his use of magic by means of a mysterious group called the White Council (especially as a means of offense) and throws few fireballs for most of the novel, instead having to rely on his natural prowess and wit to escape from a lot of situations. The climax of the novel, though, is a satisfying maelstrom of magic and quick-thinking action.

Storm Front was just the change of pace I needed from the world of dense Fantasy and Science Fiction. The perfect novel for a camping trip, a long bus ride or a day at the beach, Storm Front stole away the hours of my day in a way that hasn’t happened since I first stumbled across John Scalzi, and I can already see Butcher’s Dresden Files becoming my next great addiction. From all accounts, Butcher grows as a writer over the course of the series and, frankly, I’m a little upset there are only ten more volumes to go before I have to wait just like all the other fans of the series.