Mark Newton is a good friend of this blog, so I was pretty excited when the book he wrote (and I REVIEWED) didn’t suck. In fact, it was pretty damn good. The rub? Mark only had a deal with Tor UK, meaning most people on my side of the pond (North America) weren’t going to be able to get their grubby hands on the book. 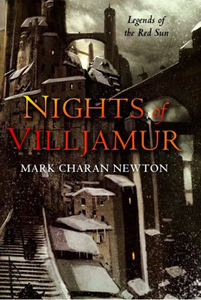 Well, leave it to Del Rey to step in and save the day:

Margaret Halton, Rights Director at Pan Macmillan, has sold US rights in two fantasy novels by UK novelist Mark Charan Newton to Chris Schluep for a good five-figure sum in US dollars.

World rights in the novels, which open with Mark’s mainstream debut NIGHTS OF VILLJAMUR (to be published in hardback in the UK in June 2009), were acquired by Peter Lavery at Tor UK from John Jarrold in 2008.

Chris Schluep said: ‘I am so excited to be publishing NIGHTS OF VILLJAMUR, which is an absolutely wonderful book, and I’m very much looking forward to launching the U.S. career of an important and talented new writer in the field. I’m convinced that Mark has a bright future ahead of him; he’s one of those writers that you come across only on occasion . . .’

‘Chris acted quickly and with great enthusiasm. Mark and I are delighted, and looking forward to working with him and his colleagues at Del Rey, who I know well,’ said John Jarrold.

It’s about time. Good on Del Rey for grabbing Mark while they still can, I have a feeling they won’t regret it. You can check out my interview with Mark HERE.