Adrian Tchaikovsky made some waves when his first novel, Empire in Black and Gold was first released, with many bloggers lauding it as one of the best debuts of the year. He’s fallen a bit off the radar since then, but Pyr Books is trying to change that. 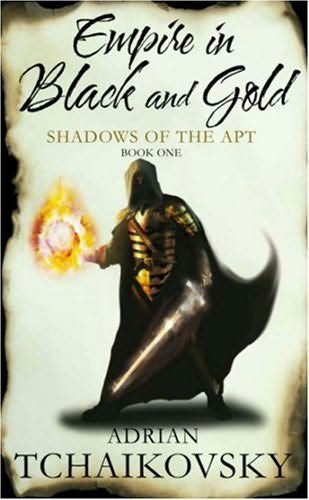 Adrian Tchaikovsky’s brilliant Shadows of the Apt series is coming to the US!!

We’ve just done a deal to bring Empire in Black and Gold, Dragonfly Falling, and Blood of the Mantis out here. All three books will be appearing from Pyr in early 2010, published in trade paperback in three consecutive months , March-April-May, so US readers can catch up with this dynamic series fast. Shadows of the Apt is a fantastic fantasy, with steampunk elements, that absolutely blew me away when I read it. Airships, steam trains, giant insects, fantastic characters, great action…

From the book description of Empire in Black and Gold:

Seventeen years ago Stenwold witnessed the Wasp Empire storming the city of Myna in a brutal war of conquest. Since then he has preached vainly against this threat in his home city of Collegium, but now the Empire is on the march, with its spies and its armies everywhere, and the Lowlands lie directly in its path. All the while, Stenwold has been training youthful agents to fight the Wasp advance, and the latest recruits include his niece, Che, and his mysterious ward, Tynisa. When his home is violently attacked, he is forced to send them ahead of him and, hotly pursued, they fly by airship to Helleron, the first city in line for the latest Wasp invasion. Stenwold and Che are Beetle-kinden, one of many human races that take their powers and inspiration each from a totem insect, but he also has allies of many breeds: Mantis, Spider, Ant, with their own particular skills. Foremost is the deadly Mantis-kinden warrior, Tisamon, but other very unlikely allies also join the cause. As things go from bad to worse amid escalating dangers, Stenwold learns that the Wasps intend to use the newly completed railroad between Helleron and Collegium to launch a lightning strike into the heart of the Lowlands. Then he gathers all of his agents to force a final showdown in the engine yard…

And for those of you wondering why you should wait for the US edition? (And needing another reason other than your karma and the desire to support Pyr in bringing across more such deserving UK authors…)

Well, I’m pleased to announce that the brilliant and talented Jon Sullivan, who did the covers for the 2nd and 3rd books in the UK, is going to be doing brand-new artwork for all three of the US editions. Now that’s worth

Though the books have been available up here in Canada for quite a while, I’ve never really given them a shot. For those of you who have read them, care to elaborate on what makes them special?

Tchaikovsky also has a pretty fun blog, which can be found HERE.