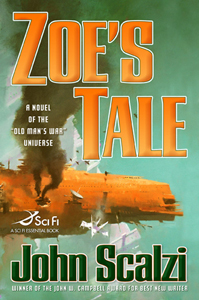 John Scalzi’s been a favourite of mine since I discovered him last summer. Full of quick wit and larger-than-life characters, his novels never failed to entertain and reinvigorate my love for reading. His novels never let me down.

Until now, if only just a little bit.

Though Scalzi’s already a big name in the Science Fiction genre (thanks in no little part to his blog, the Whatever), he made some waves earlier this year when Zöe’s Tale was nominated for a Hugo. It’s hard enough to get nominated for a Hugo (just ask this list of authors), but to get nominated for a Best Novel Hugo with a novel that is geared towards a Young Adult (YA) audience is doubly hard. The problem, though, is that I don’t really think Zöe’s Tale deserves it. Put up against the other YA novel nominated in the category, Neil Gaiman’s The Graveyard Book, Scalzi’s effort just doesn’t hold up.

Now, don’t get me wrong, Zöe’s Tale is a fine novel, full of the stuff that made Scalzi’s earlier novels to enjoyable, but the novel just fell a little flat where the plotting and (particularily concerning for a John Scalzi novel) pacing were concerned. The novel begins with a fantastic prologue, immediately presenting an interesting narrator (Zöe Boutin-Perry, who is well known to fans of Scalzi’s work) and an interesting situation (stranded in space, and seemingly betrayed by their superiors), but then things take a turn for the pedantic when the narrative shifts focus and spends 100 pages in medias res, just trying to catch back up to the tense moment left hanging at the end of the prologue.

In the end, Zöe’s Tale just treads too much familiar ground, and loses some of the tension and impact it could have had, were I not already familiar with the story from having read The Last Colony. Of course, this is an intrinsic quality of any novel that’s retelling a story, but novels like Ender’s Shadow did a better job of taking a well-established story, and adding more meat into the mix, by giving a shifted perspective on the events in the novel. With Zöe’s Tale, I couldn’t help but feel like I’d read most of it before.

Luckily, Scalzi’s novels never succeeded on plot alone, and the characters in Zöe’s Tale shine, just as I’ve come to expect. For a middle-aged man, Scalzi does a remarkable job of capturing the voice and character of at 17/18-year-old girl. Also impressive was his ability to inject life into Hickory and Dickory, characters who were little more than silent body guards in The Last Colony. I was disappointed, however, in the treatment of John Perry and Jane Sagan, well-established characters from the earlier novels – perhaps because they are being portrayed as parents, rather than full-fledged characters, they seemed to lack some of the panache I expect from them. Of course, Scalzi’s already told their side of the story, so it might be counter-productive to have them steal any of the spotlight.

The plot moves along through sharp dialogue, but I often caught myself wonder how everyone in the novel, teenagers and adults included, were so damn witty all the time. Scalzi does ask the reader to suspend belief a bit, near the end of the novel, as an we watch an 18-year-old girl negotiate politics and war with a ruthless member of an omnipotent race of aliens. Despite these flaws, Scalzi still shows he’s at the top of his game in writing fast, engaging dialogue.

Shifting the focus away from John Perry to his (admittedly more interesting) daughter, was a good move. Zöe’s an interesting protagonist and has great voice as a narrator. I suppose the issue I have is that I would have liked to have met her in a way that also moved the Old Man’s War universe forward, rather than rehashing familiar events. What’s there in Zöe’s Tale would have made a great short story, to fill in missing events from The Last Colony, but isn’t quite enough to propel a whole novel, even if the word-count is slim.

In all, Zöe’s Tale was a difficult novel for me to wrap my emotions around. On the one hand, it was a fast, fun read, while on the other it wasn’t able to live up to Scalzi’s other novels. Though I’ve ragged on the novel here, it was only because of the high expectations set by Scalzi’s previous work. Was it worthy of a Hugo nod? No. Is it worth your precious reading time on a warm summer afternoon? You bet.