Pat’s recent post reminded me that I meant to make a similar post that I’ve been wanting to point out Blake Charlton‘s Spellwright. 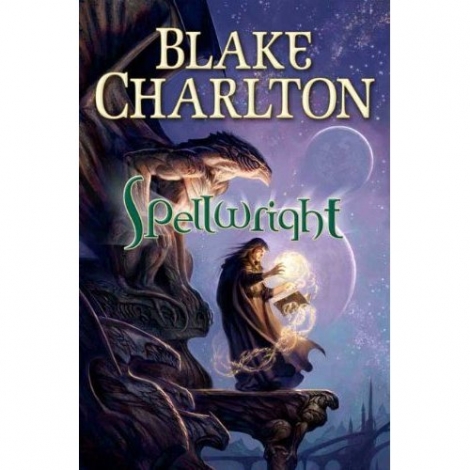 Imagine a world in which the written word can leave a page to physically lift a man into the air, sharpen his pitchfork, or stop his beating heart.

Such a world is home to Nicodemus Weal, a young wizard with tremendous talent for forging the magical runes which can create spells. Indeed, throughout his adolescence, Nicodemus was thought to be the Halcyon, a powerful magic-user prophesized to save the land from a coming apocalypse known only as the Disjunction.

There was only one problem: runes must be placed in an exact order to create a spell. Any deviation results in a “misspell”–a flawed spell that behaves in an erratic, sometimes lethal, manner. It so happens that Nicodemus is a “cacographer,” one unable to correctly reproduce even simple texts.

Now twenty-three, Nicodemus lives in the devastating aftermath of having failed to live up to prophecy. His magical talent is restricted to the kitchen, where he cleans pots and scrubs walls with childish language. Life slips by one aggravating day at a time until a visiting author identifies an ancient curse infesting the young wizard’s mind. The malicious text has, in fact, stolen his ability to spell. Suddenly, the two wizards closest to Nicodemus are murdered violently and he is forced to flee his home in a desperate quest to recover the stolen part of his mind.

SPELLWRIGHT is the first volume of Nicodemus’ journey across the kingdoms of Faragard, his encounters with monsters and gods who distort language to their own ends, and his internal struggle to accept himself as whole without his ability to spell.

Like most of the hyped-up debut novels of the last few years (The Blade Itself by Joe Abercrombie, The Name of the Wind by Patrick Rothfuss, The Red Wolf Conspiracy by Robert V.S. Redick, etc…) Spellwright doesn’t sound like a bastion of new, uncharted ideas, but what’s getting me excited about it are the list of authors who have been providing nice blurbs about it.

Blake Charlton has not only invented a fascinating world and peopled it with realistic people and wonderful, grisly monsters, but he has also created one of the few truly original magical systems we’ve seen in fantasy fiction. The lucid complexity of the magic reminds me of Jack Vance, which is high praise indeed. I’m fascinated to see what happens next and will be following every word with the absorption of an apprentice spellwright. You will be, too. –Tad Williams

Nicodemus Weal is a protagonist that all of us can identify with. SPELLWRIGHT features a unique system of magic and characters that are genuine inhabitants of that world. SPELLWRIGHT is a letter-perfect story: an absorbing read and recommended. –Robin Hobb

SPELLWRIGHT is exactly the kind of book that got me into fantasy in the first place. Blake Charlton has built a world that his as new as it is classic, and a story that kept me reading late into the night. Blake Charlton is a talent to watch. –Daniel Abraham

Blake Charlton’s novel is, quite literally, a magical and spellbinding adventure about overcoming the sort of odds that many in our own world struggle with. –Tobias Buckell

I usually don’t give a whole lot of thought to author blurbs, but I can’t really ignore when the list includes so many of my favourite authors. Whether Spellwright will set the world on fire or not remains to be seen, but it has certainly done enough (hey, the beautiful Todd Lockwood artwork on the cover helps, despite the lame font) to make sure I keep an eye on it.

You can find Charlton’s website HERE and his (entertaining) blog HERE.