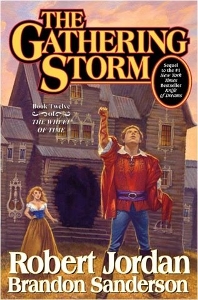 Back when Robert Jordan was still alive, there was a lot of talk (and even a novel, New Spring) about novels set outside of the mainline Wheel of Time series. Oddly enough, even Jordan’s passing was not enough to quell the rumours.

Brandon Sanderson, who was chosen to complete Jordan’s series, spoke out (rather bluntly) about his opinion on expanding the series beyond the planned 13 volumes:

Mr. Jordan spoke with Tor (and even signed contracts) regarding some other books set in the WoT universe. The talk was originally centered on the three prequels Mr. Jordan wanted to write (New Spring, which was published, was the first of these three.) Later, Mr. Jordan shifted the discussion to something called “The Outriggers” which were within WoT continuity, taking place after the end of the series. They were to deal with some certain characters from the main storyline, expanding on their lives.

I think that Harriet and I are on the same page when we say we’ve got our hands full with the three books of A MEMORY OF LIGHT. Really, this is big enough a project for now, and all of our energies are focused on making certain these last novels are everything they need to be.

That doesn’t answer your questions though, does it? Will the other books get written? Here’s where we get vague, because I simply can’t tell you a yes or a no.

The decision will be Harriet’s. She gets to make the call. And since all of her energy is focused on these last three books, I suspect we’re not going to know the fate of the Outriggers or the Prequels for some time yet. I’m afraid you’ll just have to be patient.

At JordanCon, Tom Doherty (CEO of Tor) mentioned the Outriggers and how excited he is for them. (They would be about his favorite character.) Tom has been very involved in the WoT all through its life, and is a huge fan.

I don’t want to see the Wheel of Time turn into an eternal franchise. I said this last weekend at my signing in Montreal. Part of the value of a great work of art is, in my opinion, the ending. An ending loses power if it isn’t allowed to be…well, the END.

I haven’t specifically told Harriet not to do the Outriggers. That isn’t my place. When she’s asked for my input, I’ve said “My suggestion is to be very, very careful. I would err on the side of protecting Jim’s legacy, and don’t know if it would be appropriate to do any more books.” However, if she asks me to do them, I will most probably say yes.

Why? Well, a couple of reasons. My soul is not part of the Wheel of Time. This series is NOT mine–it is Harriet’s and it is yours. But my soul is in there, and it would be very hard to let someone else write it. Almost as hard as it would be to let go of another series. My reasoning would be the same as my reasoning behind picking up AMOL in the first place. If Mr. Jordan’s not here, I want to make certain that someone who respects the series is writing on it.

I have told Harriet, and I have repeated it on blogs, that I would say no (though it would hurt to do so) if a decision were made to go beyond the Outriggers and the prequels.

But please, understand. There has been very little talk of these things. AMOL is what NEEDS to be done.

Phew! Believe it or not, this is a very abridged version of Sanderson’s thoughts on the subject (say anything about the man, but don’t say he doesn’t like to talk!) and it’s interesting to see him struggling to straddle the line between fan and author of the series.

Out of respect for Jordan, it seems like it would behoove Tor to let the series stand, after Sanderson has completed it. Even as it is, there are fans out there who are unhappy with someone else getting their hands on Jordan’s series, and I have a hard time believing that whole new novels (written mostly without guidance from Jordan’s notes, which were plentiful for A Memory of Light) would go over well.

My own opinion about it is that one can’t help but feel that any attempt to expand the world beyond the main series would be nothing more than a money-grab, taking advantage of Jordan’s immense popularity. Just take a look at what happened to the Dune series after Frank Herbert passed away and control of the series fell to Kevin J. Anderson and Brian Herbert.

In any case, it’s worth taking a look at Sanderson’s whole account of the Outrigger Trilogy over at Dragonmount.