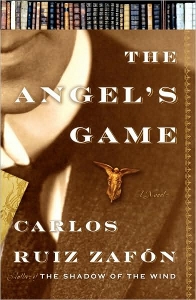 Certainly the best novel I’ve read this year, The Shadow of the Wind may very well be my favourite novel I’ve ever read. Zafon’s haunting tale of love, lust, revenge and friendship has everything I could want from a novel and more. It’s not often that a novel can actually live up to the hype surrounding it; it’s even less often when a novel can surpass that hype, but that is exactly what The Shadow of the Wind accomplished. I eagerly await the English translation of El Juego del Angel.

So ended my review of The Shadow of the Wind by Spanish author Carlos Ruiz Zafon. Strong words, but sounding no less true from where I sit now, months removed from writing them. In fact, my opinion of the novel has only grown, as I look back on it and reminisce – there’s no quibbling about it anymore, The Shadow of the Wind is my favourite novel, by a fair margin.

So where does that put me now, having finished that novel I was so eagerly referring to in the first review? I’ve read The Angel’s Game (the English title of El Juego del Angel), and have had to sit for weeks, letting my thoughts coalesce into something that I can define coherently enough to call it a review.

Where The Shadow of the Wind drew on Zafon’s background as a writer of Young Adult fiction – full of wonder and adventure; brimming with caricatures and humour; full of that undefinable feeling of growing up – The Angel’s Game is a very adult novel. Where The Shadow of the Wind watched a young boy grow up, The Angel’s Game is all about a grown man and his gut-wrenching spiral into the darkest parts of human emotion. There’s humour to be found, and light moments in the narrative (especially between David Martin, the narrator, and a young girl named Isabella, who fans of The Shadow of the Wind might recognize), but its achingly obvious, like two friends trying to cover up a painful memory with awkward small talk. Zafon’s ability to capture the subtleties of human emotion is startling.

Lucia Graves (daughter of Robert Graves, poet) deserves all the accolades in the world. The rambling prose is buttery smooth, and simply a joy to read. Zafon’s control over language, description and character is preserved by Graves and I can’t imagine how the novel could be any better even in its native language.

Another quote from my review of The Shadow of the Wind, and one that remains perfectly valid. Once again, Lucia Graves has provided a beautiful rendition of Zafon’s original text, and I can think of few novels that are more readable than The Angel’s Game. The pages melt away, and, even in this age of distraction, I found myself forgetting completely about the outside world.

Unlike its predecessor, The Angel’s Game expects a bit of work on the part of the reader. Zafon weaves a tale full of characters with shadowy intentions and plays with the idea of what it means to be narrator of one’s own story. This all ends in a poignantly frustrating ending, that is sure to leave book clubs arguing for many years to come. Some people may be put off by an ending that throws the whole narrative into question, but I’ve found myself still pondering the novel, weeks after having finished it, constantly examining all the little clues hidden in the narrative.

Then there is the narrator and protagonist himself, David Martin; a lesson in frustration and dishonesty, a man struggling to discover his place in the world and trying to maintain a grasp on keeping afloat amongst the chaos. Though not as empathetic and likable as Daniel Sempere (protagonist and narrator of The Shadow of the Wind), Martin’s skewed view of of the events in the novel lend a more literary tone to the narrative and overall arc of the story. Zafon plays wonderfully with the idea of a reader inherently trusting the narrator, and manages to keep Martin enigmatic to the very end, despite the story being told in his own words.

I think the most accurate and honest thing I can say about Zafon’s novels is that despite the fact that they sell millions of copies worldwide, and hit every bestseller list imaginable, when I’m reading them they still feel like my little secret – just me and the novel, a world that exists only in my hands.

It’s hard not to use superlatives when talking about Carlos Ruiz Zafon and his novels. The Angel’s Game had lofty expectations thrust upon it, but somehow, despite not quite reaching the heights of its predecessor, managed to reach up and grasp its potential. Does it supplant The Shadow of the Wind as my favourite novel? No. Does it fall into my top 10? Probably not. Is it the best book I’ve read this year? Without a doubt.