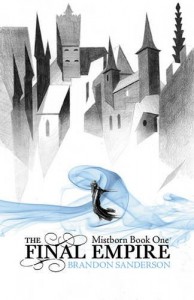 Back in December of 2007, Brandon Sanderson was just like every other new-to-the-scene author, just trying to make his way as a young author of Fantasy novels. He had a few published novels under his belt (and a whole slew more hidden in the deep corners of his house), had been getting good critical acclaim and decent sales, but was far from a household name. Things were looking up for Sanderson, but no one had any idea of just how high he would climb. Then came the announcement: Brandon Sanderson was chosen to complete the late Robert Jordan’s legendary Wheel of Time series.

Since then, Sanderson’s stock has risen to meteoric heights. His own novels have been released to strong critical acclaim and he’s landed himself on the New York Times Bestseller list. Wheel of Time fans wait with bated breath for the fall release of The Gathering Storm, eager and/or reluctant to see whether Sanderson is able to do justice to their favourite work. As someone who will not be reading The Gathering Storm when it arrives, I was nonetheless curious to see what all the fuss was about. I had dipped my toe in his work before (a half-finished copy of Elantris still sits on my bookshelf), and being on the hunt for some meaty Fantasy, I picked up The Final Empire, the first volume of his Mistborn trilogy. 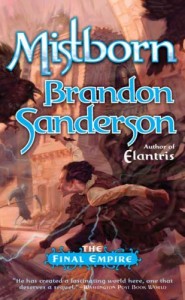 Though not free of cliche, it’s clear from the get-go that Sanderson wants to put his own spin on the typical Fantasy story, to make a point that we haven’t necessarily seen it all. Yeah, at its heart, The Final Empire is about bringing down the oppressive Lord Ruler, but it’s the details that count, and Sanderson’s details are tight. The big hook is that Sanderson’s Dark Lord is not a faceless demon, hellbent of taking over the world, rather he already controls it, and has for 1,000 years (natch). Even more interesting is the fact that Sanderson’s Dark Lord, before he came to rule… was once the Hero of Ages, prophecised to defeat a mysterious force called The Deepness, and save the world. Something, however, went very wrong.

Praise has been heaped upon Sanderson because of his deep, thoughtful systems of magic, and The Final Empire is ample evidence as to why. Allomancy – which involves ingesting and then ‘burning’ particular metals to unleash their power – shows a level of thought and real-world practicality that few other authors can claim. Most importantly, it has a very direct effect on the plot and conflict of the novel. It’s no simple special effects show, but rather a integral part of who the characters are and how the economy of the world operates. My biggest regret (and something I hope will be addressed in later volumes) is that Sanderson didn’t get more philosophical about the (no doubt) addictive qualities of what amounts to a drug that grants super-human strength, washes away weariness, enhances every sense and even allows the user to manipulate the emotions of those around them. Even Terry Brooks was addressing the ideas of addictive magic, over 20 years ago, and it seemed like a missed opportunity on Sanderson’s part.

Which brings me around to one of the general inconsistencies of the novel. Sanderson’s prose is safe and easy, but fails to capture the ruthlessness that one might expect from an ash-choked empire crushed under the iron fist of a ruthless dictator for a millenium. Slavery abounds, mass executions take place just to prove a point, rape is whispered about… and yet Sanderson somehow manages, through use of PG-rated language, to make the novel feel safe. It’s a disappointment that Sanderson’s prose wasn’t able to better challenge the unique, oppressive nature of his world and characters. 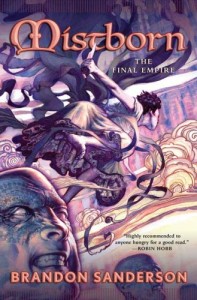 At its heart The Final Empire is a heist novel, the tale of a thieving crew trying to bring down the empire. Naturally, a lot of the novel’s success relies on this group and Sanderson manages to deliver a likable, if somewhat uneven and Mary Sueish cast of scoundrels. Kelsier, the leader of the crew and legendary Mistborn (a super-powerful Allomancer) is the obvious standout, being The Final Empire‘s version of Gandalf (albeit more rougish, volatile and reckless) and the protagonist, Vin, shows nice growth through the novel, even if the reader has to suspend belief when considering her advancement from street urchin to powerful Allomancer by the end of the novel. Sanderson throws in enough genuine twists to keep them all on their toes as they try to pull of the biggest heist their world has ever seen.

Prophecy plays a big role in The Final Empire, and Sanderson plays cleverly with the idea of history and information warping as time passes and it filters through the hands of those in power. The first volume doesn’t touch on this aspect as much as I would have liked, but a particular scene during the rip-roarin’ climax suggests that it will be an important element through the final two volumes of Mistborn.

As someone who was introduced to Fantasy through Terry Brooks, R.A. Salvatore and J.R.R. Tolkien, it’s nice to find a book that reminds me of those early, exciting days of discovering the genre. I suppose the best thing I can say for it is that The Wheel of Time fans have nothing to worry about; with his charming characters, great grasp on how magic is supposed to work, and easy-to-read prose, Sanderson is surely setup to complete Jordan’s series as well as anyone writing. For the first time since Joe Abercrombie’s The First Law trilogy, I’m excited at the idea of continuing on with a series, instead of hitting that towering pile of books, littered with other authors waiting to be read.