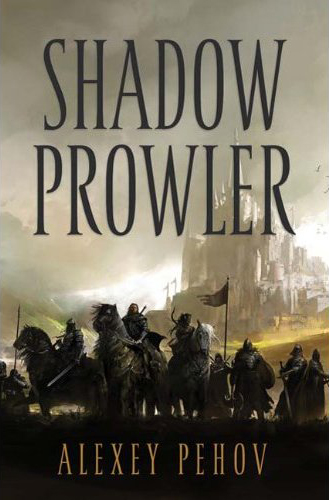 And the synopsis from risingshadow.net:

An army is gathering; thousands of giants, ogres, and other creatures joining forces from all across the Desolate Lands. In the Crayfish Dukedom they are forging weapons night and day. By the next spring, or perhaps sooner, the Nameless One and his forces will be at the walls of the great city of Avendoom. Unless Harold, master thief, can find some way to stop them.

Harold will be accompanied on his quest by an Elfin princess, Miralissa; ten of the Wild Hearts, the most experienced and dangerous fighters in their world; and the king’s court jester. These companions will form a bond of friendship and honor that must carry them over a series of frightful obstacles before they can reach their goal: Hrad Spein, the mysterious Palaces of the Bones. Only there will they find the key to undoing the ancient curse that hangs over their world and ridding the land of the Nameless One forever.

Reminiscent of Michael Moorcock’s Elric series, Shadow Prowler is the first work by the bestselling new generation fantasy author Alexey Pehov to be translated into English.

The work was translated from Russian by Andrew Bromfield, best known as the translator of the highly successful Night Watch series.

Sounds traditional, if that’s your thing. I’m always curious about novels that are deemed good enough (and successful enough) to warrant translation and overseas release. I also appreciate a foreign look at the genre, in the hopes that a new light can be shone on old tropes. In any case, I’ll be keeping my eye on this one over the coming months. It is set to be released by Tor Books on February 16, 2010.