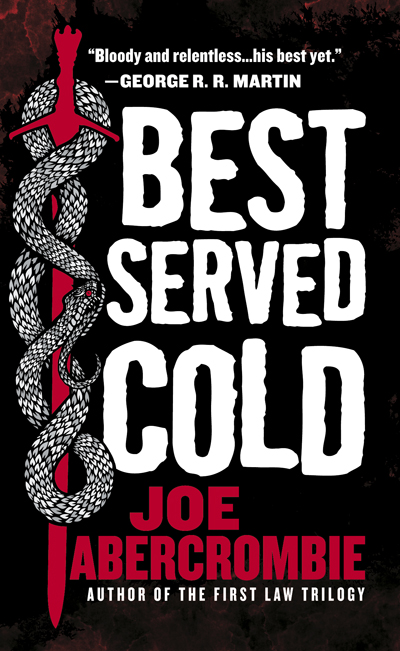 I completely panned Orbit’s first attempt at creating a cover for Joe Abercrombie’s Best Served Cold. It was a disaster. A cover that tried to please everybody from every angle, and ended up as mish-mashed as Frankenstein’s Monster and missed every mark a good cover should hit. Furthering the pain was the beautiful cover for the UK edition.

The second time around, the new Art Director at Orbit Books, Lauren Panepinto, does a much better job of capturing the character of Joe’s novels, while also producing a Mass Market Paperback book that wouldn’t look amiss in the hands of any reader too shy to admit they read Fantasy. And really, you can never go wrong with simple, red, white and black. With a cover that wouldn’t look amiss in the Literature or Mystery section of a bookstore, it seems clear that Orbit is going after the non-Fantasy reader with this release. It’ll certainly look sharp sitting at the front of a bookstore, unidentified by genre. It still doesn’t hit the same level as the UK eidtion, but kudos to Orbit for getting far away from their original cover, and coming up with something that I’d want to pick up in the bookstore.