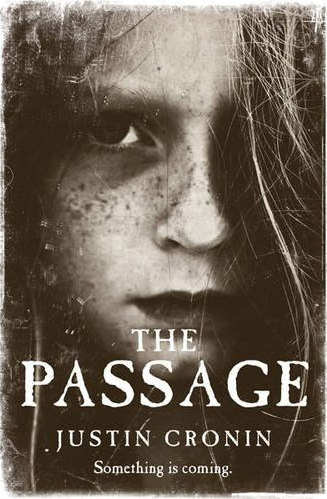 Amy Harper Bellafonte is six years old and her mother thinks she’s the most important person in the whole world. She is. Anthony Carter doesn’t think he could ever be in a worse place than Death Row. He’s wrong. FBI agent Brad Wolgast thinks something beyond imagination is coming. It is. THE PASSAGE…

Thanks to Graeme’s Fantasy Book Review for the heads up on the cover!

The Passage first caught my attention when the film rights for a still unfinished manuscript, were purchased by Scott Free Productions (Ridley Scott’s production company) at auction for 1.75 million dollars.

For five days Sony Pictures, Warner Brothers, Universal Pictures and 20th Century Fox battled over the film rights to Mr. Ainsley’s novel “The Passage,” the first book of a planned trilogy about vampires born not of bat bites, but of medical experiments gone awry. The winning bid, made last month by Fox 2000 and Ridley Scott’s Scott Free Productions, was $1.75 million.

The auction is just the latest indicator of the lengths that studios will go to in search of their next franchise, at a time when it seems that all the biggest projects have already been done or spoken for.

“Fantasy has always been popular in Hollywood,” said Elizabeth Gabler, president of Fox 2000 Pictures. “And between the ‘Lord of the Rings’ films and the upcoming end of the Harry Potter series, everybody’s looking for what the next version of those movies will be.”

That’s a lot of cash for an author who almost no one’s heard of, let alone read. Or, for that matter, for an unfinished manuscript (as an aside, I’ve got a few of those sitting around, if any film companies want to purchase the rights, we’ll start the bidding at 500k….) Perhaps even more surprising, though, is the sum paid for the rights to publish the novel: somewhere in the ballpark of $3.75 million dollars.

The frenzy for the “Passage” film rights was unleashed even before the first pitch went out to the studios. Two weeks before the studio deal, Ellen Levine, a literary agent at Trident Media Group, had taken the manuscript to the country’s biggest publishing houses, including Random House and the Penguin Group. Ms. Levine chose to send out the book under the pseudonym Jordan Ainsley because the author, Justin Cronin, winner of the PEN/Hemingway Award for his 2001 short-story collection, “Mary and O’Neil,” was known more for midsize family dramas than for Stephen King-size thrillers.

“We weren’t trying to hide who he was, but I didn’t want him to be typecast as one kind of author, and I thought this had vast commercial potential,” Ms. Levine said.

The story, a futuristic fable about death row inmates transformed into vampires by a government-spawned virus, hit a nerve with publishers. A number tried to block their competitors with pre-emptive offers, some in the millions. The offers were summarily rejected, and the manuscript was put on the block at a “best bids” auction between four houses on July 3.

The winner for the United States rights to the trilogy was Ballantine Books, which New York magazine reported had paid $3.75 million, a figure that Mark Tavani, the book’s editor, said was “not correct, but in the ballpark.”

That’s some serious weight behind the novel. Whether it’s worth that sort of money remains to be seen, but it seems safe to say that we’ll see a humungous push behind the novel when it’s released next year (the article in The New York Times points to a Summer 2009 release, but review copies are only just reaching bloggers hands now. Speak of, I’d love a copy, if anyone’s listening). Who knows, maybe in five years we’ll be as sick of Justin Cronin and The Passage as we are of Stephanie Meyer and Twilight; just remember, there was a time when no one knew her name.