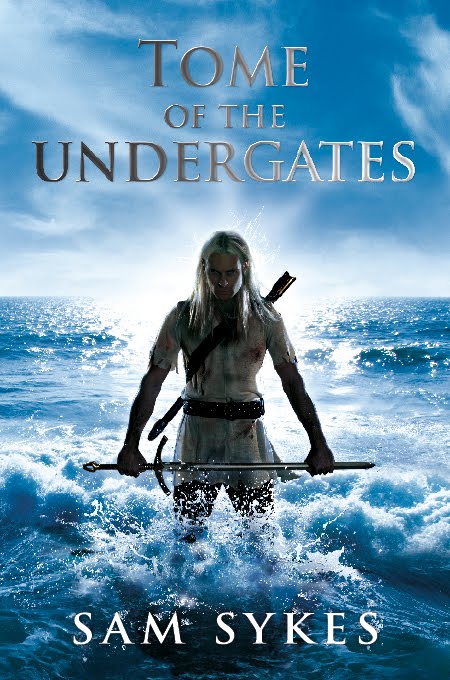 Lenk can barely keep control of his mismatched adventurer band at the best of times (Gariath the dragon man sees humans as little more than prey, Kataria the Shict despises most humans, and the humans in the band are little better). When they’re not insulting each other’s religions they’re arguing about pay and conditions.

So when the ship they are travelling on is attacked by pirates things don’t go very well. They go a whole lot worse when an invincible demon joins the fray. The demon steals the Tome of the Undergates – a manuscript that contains all you need to open the undergates. And whichever god you believe in you don’t want the undergates open. On the other side are countless more invincible demons, the manifestation of all the evil of the gods, and they want out.

Full of razor-sharp wit, characters who leap off the page (and into trouble) and plunging the reader into a vivid world of adventure this is a fantasy that kicks off a series that could dominate the second decade of the century.

Those in the know (i.e. his publisher, who wants him to succeed at any cost), claim Sykes, a 25-year-old, is going to be the debut author of 2010. You know, the next Patrick Rothfuss. I’m sure Blake Charlton and Tor Books, with the 2010 release of Spellwright, have something to say about that, along with Penguin Books and Paul Hoffman, who release The Left Hand of God in 2010. Still, if you ask me, you can’t have too many authors vying to debut novel of the year.

What really gets my attention about Tome of the Undergates, beyond the hype, is that Sykes is so young (same age as myself, as a matter of fact), and that’s almost reason enough to give it a go when I get my hands on a copy.

As for the cover, I won’t bellyache. I do like the water, though, and the general tone of the colours. I’m excited to see what Pyr Books, who is publishing the novel in North America, pulls together for their version of the cover.

Sykes himself is an amusing guy, and you can find him on his WEBSITE and on TWITTER.