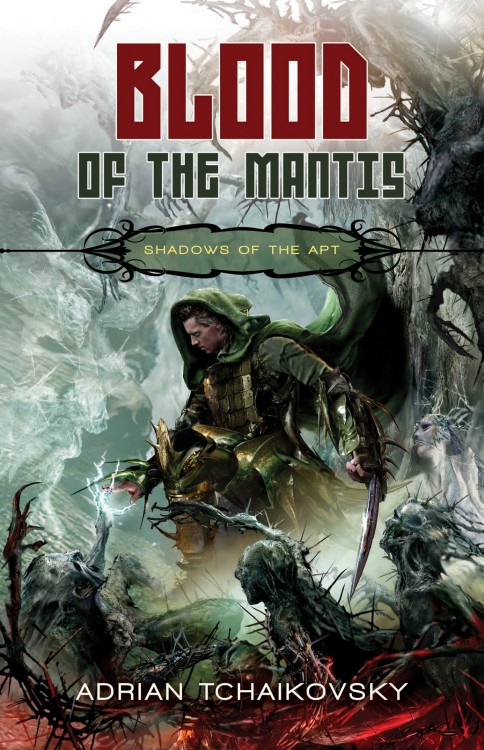 Driven by the ghosts of the Darakyon, Achaeos has tracked the stolen Shadow Box to the marsh-town of Jerez, but he has only days before the magical box is lost to him forever. Meanwhile, the forces of the Empire are mustering over winter for their great offensive, gathering their soldiers and perfecting their new weapons. Stenwold and his followers have only a short time to gather what allies they can before the Wasp armies march again, conquering everything in their path. If they cannot throw back the Wasps this spring then the imperial black-and-gold flag will fly over every city in the Lowlands before the year’s end. In Jerez begins a fierce struggle over the Shadow Box, as lake creatures, secret police and renegade magicians compete to take possession. If it falls into the hands of the Wasp Emperor, however, then no amount of fighting will suffice to save the world from his relentless ambition.

A few weeks ago, I posted the covers to two of Tchaikovsky’s novels, Empire in Black and Gold and Dragonfly Falling, which I was quite fond of, in a schlocky-ass-kickery-Fantasy kinda way. Pyr Book released the cover to Tchaikovsky’s third novel, Blood of the Mantis, also with art by Job Sullivan and I’m not quite so enamoured with it.

It’s full of energy and evocative imagery, which I’ve come to expect from Pyr, and I don’t even mind the dreaded ‘hooded-figure’, but the CGI artwork is a bit more obvious this time, compared to the previous two covers. Reminds me a bit of that scene in The Lord of the Rings movie when Frodo falls in the Dead Marshes and is attacked by those weird ghosts. Still, the colour scheme is great, and it’ll certainly stand out on the shelves next to its two companions.