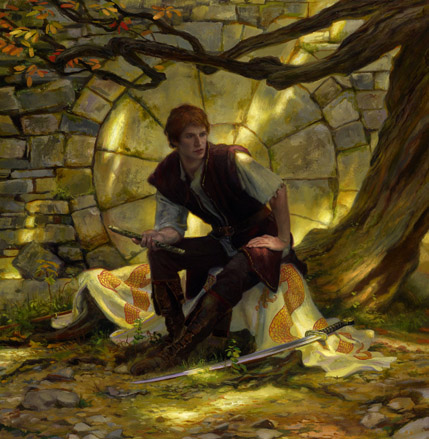 Irene Gallo has posted the artwork for the upcoming E-book edition of Robert Jordan’s The Dragon Reborn, painted by Donato Giancola. Donato explains the process behind coming up with the art:

The character of Rand al’Thor is a reluctant player in the destiny foretold for him within the complexities of the Wheel of Time. Rather than focusing on the conflicts, battles, and web of political maneuverings Robert Jordan brings to life within these novels, I wanted to portray the character grappling with an internal struggle the common reader can more easily relate to through their own experiences. The choices (or lack there of) Rand had before him provided us with a glimpse into this figure’s past as an average, down to earth person.

The choice between the sword and the flute for me, exemplifies the issues Rand has engaged on the path in becoming the Dragon Reborn. He must turn is back on the simple life he had previously known, and embrace his destiny. It was this transformation I found most interesting as a challenge to illustrate, forsaking all the wonderful magical moments and epic conquests which could easily have produced a striking image. But this personal dilemma simply seemed more human, representing a difficult psychological change in the character and reflected the basic theme within the novel.

Donato is one of my favourite working artists, but this artwork is a little hit-or-miss for me. I love the little details, like the Dragon Banner that Rand is sitting on, and the inclusion of both his Heron Mark sword and his flute. It speak nicely of some of the quieter moments in the novel, which is great for fans of the series, but doesn’t necessarily capture the energy and importance of the novel, at least in a things-really-kick-into-overdrive-in-this-novel kind of way. The scene of Rand capturing Callandor, featured on the original novel, seems more appropriate for the cover. Still the artwork itself is fantastic.