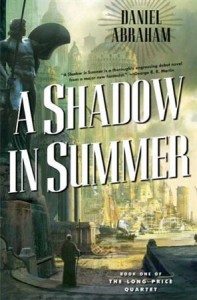 A Shadow in Summer

Daniel Abraham is not as well known as Patrick Rothfuss, nor does he sell as many books as Brandon Sanderson, and he lacks the mass market appeal of Joe Abercrombie, but, like these contemporaries, his debut series, The Long Price Quartet, has helped shaped the face of modern Fantasy in the twenty-first century. Where Abraham sets himself apart from these other authors, though, is his ability to shatter the preconceptions of the genre and show that Fantasy is so much more than fireballs, sword fights and Dark Lords.

Despite being familiar with Abraham, and following his career quite closely over the past few years, this was my first experience with any of his long fiction. It wasn’t that I was uninterested in The Long Price Quartet, quite the opposite, but rather that I was saving it for a special occasion, when I was feeling burned out on the genre. Because of this two-year-long build up, and the countless other raving reviews floating around the Internet, my expectations were (perhaps unfairly) high. Having now finished A Shadow in Summer, the first volume of the quartet, I can say without reservation that all my expectations were surpassed. Frankly, it’s hard to believe that A Shadow in Summer is a debut novel, and not the work of a novelist with a dozen novels under their belt. Abraham’s novel is confident, and the writing shows a maturity that’s rare in the genre. It’s frightening to think of how accomplished Abraham will be when he does have a dozen novels under his belt.

Much fuss has recently been made about the trend towards grittier, more ‘adult’ Fantasy novels, and A Shadow in Summer is a fine example of this trend, but for wholly different reasons than Joe Abercrombie and Richard Morgan. A Shadow in Summer is adult in every sense of the word, but manages to be defined so without any gratuitous sex, abrasive language or gut-wrenching violence. Instead, Abraham deals with mature themes (whoring, abortion and slavery are conflicts at the heart of the novel) and quiet, subtle characters who face difficult decisions and grow as a result. Much like Guy Gavriel Kay, Abraham tells a story that won’t keep you glued to the edge of your seat, but rather captures you slowly and envelops you with a world and characters that are achingly familiar.

“Tell me, Maati. What do you think of slaves?”

The question was an odd one, and his first response—I don’t—seemed too glib for the occasion. Instead, he took a pose requesting clarification as best he could while still walking more quickly than his usual pace.

“Permanent indenture. What’s your opinion of it?”

“Then think for a moment.”

They passed through the hall and onto a wide, flower-strewn path that lead down and to the south. Gardens rich with exotic flowers and fountains spread out before them. Singing slaves, hidden from view by hedges or cloth screens, filled the air with wordless melodies. The sun blared heat like a trumpet, and the thick air made Maati feel almost as if he was swimming. It seemed they’d hardly started walking before Maati’s inner robe was sticky with sweat. He found himself struggling to keep up.

As Maati considered the question, servants and utkhaiem passed, pausing to take poses of respect. His teacher took little notice of them or of the heat; where Maati’s robes stuck, his flowed like water over stone and no sweat dampened his temples. Maati cleared his throat.

“People who have entered into permanent indenture have either chosen to do so, in return for the protection of the holders of their contracts, or lost their freedoms as punishment for some crime,” Maati said, carefully keeping any judgement out of the statement.

“Is that what the Dai-kvo taught you?”

“And the third case? The andat?”

The teacher’s dark eyebrows rose on the perfect skin of his forehead. His lips took the slightest of all possible smiles.

“The andat aren’t criminals. Before they’re bound, they have no thought, no will, no form. They’re only ideas. How can an idea enter into a contract?”

“How can one refuse?” Maati countered.

“There are names, my boy, for men who take silence as consent.”

They passed into the middle gardens. The low halls spread before them, and wider paths almost like streets. The temple rose off to their right, wide and high; its sloping lines reminded Maati of a seagull in flight. At one of the low halls, carts had gathered. Laborers milled around, speaking with one another. Maati caught a glimpse of a bale of cotton being carried in. With a thrill of excitement he realized what was happening. For the first time, he was going to see Heshai-kvo wield the power of the andat.

“Ah, well. Never mind,” his teacher said, as if he had been waiting for some answer. “Only Maati? Later on, I’d like you to think about this conversation.”

Abraham paints his world with a deft, lyrical hand, and the Asian-inspired setting lives and breathes as surely as any city of our own world, while at the same time being unlike anything I’ve experienced in the genre before. The plot of the novel – which involves battles of wit and word, rather than blade – is propelled through sharp dialogue, and one often wonders if Abraham hasn’t woven as much into the silence between the words as he has in what is really spoken. The ‘poses’ interjected within conversations (a physical reflection of what the speaker is feeling) are just one facet of this, but are admittedly an aspect that might turn some readers off.