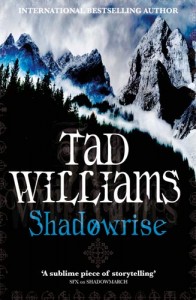 Most of the Free Readin’ segments on A Dribble of Ink come from my wanderings around the blogosphere, excerpts and short stories post by others that I find interesting. This time around, I had an opportunity I just couldn’t pass up. thanks to Deborah Beale, the wife of Tad Williams and twitter Superstar, I have an exclusive (oooh, ahhh! This is the part where you think more highly of me, because I have such astounding pull in the industry… or something like that) excerpt from Shadowrise, the third volume in Williams’ Shadowmarch series.

Chapter Eight – The Falcon and the Kite

Pinimmon Vash wiped the nib of his pen carefully on the blotting paper and then drew the looping letter bre. He wiped the pen again before starting the next letter. It was more important to be accurate than swift.

The paramount minister of Xand was writing out his calendar.

Some of the other young nobles, scions of families at least as old as the Vash, had mocked him for spending so much of his youth on his letters. What red-blooded, true child of the desert would choose to sit cross-legged for hours, first sharpening pens and mixing ink and preparing parchment, then scribbling words on a page? Even if the words had been about something manly, like battle, it was nothing like actually fighting in one, and in fact the writing exercises in which young Pinimmon had been engaged often consisted only of copying household accounts.

Not that Vash had been unable to ride or shoot a bow. He had always been just good enough to escape the worst bullying, never finishing among the leaders at the feast-day games, but never finishing last, never embarrassing himself. Thus it was that his peers had ended with middling commissions in the military or been condemned to idleness on their family’s estates while Vash had risen up beneath first one autarch then another, as scribe and accountant and bureaucrat, until he had reached the exalted position he held today, the second most powerful man in the world’s most powerful empire.

In practice, though, that only meant that he was the secretary to the world’s most dangerous madman.

Vash finished writing out his page and sighed. It was true these long days on shipboard had given him time to complete unfinished work, putting various political and economic affairs in order and answering his neglected correspondence, but even catching up with these tasks depressed Vash a bit: it felt as though he was preparing to die, readying his estate and selecting his bequests. He had been increasingly uncomfortable with his monarch for months now, but things had grown worse since the escape of the little temple girl whom Sulepis had bizarrely selected to be his hundred and seventh bride. Increasingly, the autarch seemed to be living in some realm that others like his paramount minister could only guess at but never enter — talking in disconnected sentences about odd subjects, often religious, and pursuing courses of action like this sea voyage north that Sulepis had not bothered to explain to anyone, but which would doubtless not have made sense even if he had.

Still, what was to be done? Many of the previous autarchs of Xis had been slightly mad, at least compared to ordinary folk. The generations of close breeding began to tell, not to mention that even the strongest and most sensible of men sometimes found it hard to deal with absolute power. A survivor of the reign of Vaspis the Dark had famously referred to living in that autarch’s presence being as unnerving as sleeping beside a hungry lion. But Sulepis seemed different even from the most savage of his predecessors. He gave every sign of some serious intent, but nothing could make sense of his actions.

Vash clapped his hands and stood, letting his morning robe slide from his frail old body. His youthful servants scuttled forward to dress him, their handsome little faces serious, as if they were taking care of precious artifacts. In a sense, they were, because the paramount minister’s power over them included the right to have them killed if they injured or displeased him. Not that he had ever killed any for displeasing him. He was not that type. A decade or so back he had even gone out of his way to choose boys with spirit, servants who would tease him or even occasionally pretend to defy him – knowing, mischievous, seductive boys. But as he passed four-score years Vash’s patience had dimmed. He no longer wanted the once-enjoyable, but now only strenuous exercise of bringing such servants into line. Now, he gave any new recruit only two or three whippings to reform. Then if they showed no signs of learning the silent obedience he had come to prefer he merely passed them to someone like Panhyssir or the autarch’s current regent in Xis, Muziren Shah, someone who enjoyed breaking rebellious spirits and had no compunction about pain.

I have seen too much pain, Vash realized. It has lost its power to amuse or even to shock me. Now it just seemed like something to be avoided.

And there you go! Hopefully that’ll hold you Tad Williams fans over until the book comes out on March 2nd, just a few more weeks! I know I’m excited.