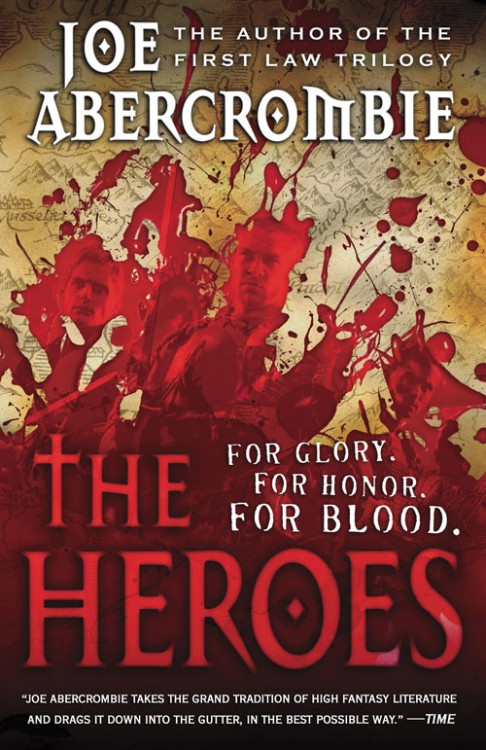 As they are wont to do, Orbit Books have done a fancy ‘Cover Launch’ for Joe Abercrombie‘s upcoming novel, The Heroes. Despite my reservations for Best Served Cold, this is is one of my most anticipated novels of next year.

Still a little too obvious and gratuitous for me, but certainly a better realization of the concept first attempted with Orbit’s release of Best Served Cold. It’s reminiscent of Dragon Age: Origins. The art in the, uhh… blood, is by Steve Stone.

You might notice the map is that of Styria, from Best Served Cold, which will be changing to a map of the North once the art is done.

War: where the blood and dirt of the battlefield hide the dark deeds committed in the name of glory. THE HEROES is about violence and ambition, gruesome deaths and betrayals; and the brutal truth that no plan survives contact with enemy. The characters are the stars, as ever, and the message is dark: when it comes to war, there are no heroes…

Curnden Craw: a ruthless fighter who wants nothing more than to see his crew survive.

Prince Calder: a liar and a coward, he will regain his crown by any means necessary.

Bremer dan Gorst: a master swordsman, a failed bodyguard, his honor will be restored—in the blood of his enemies.

Over three days, their fates will be sealed.

Lots of familiar faces. More so than last time, in fact. Among the central cast are Bremer dan Gorst and Prince Calder. In significant roles are Caul Shivers, Black Dow, Kroy, Jalenhorm, and Bayaz. Plus a galaxy of more minor returning players.

I’m glad to see Shivers back, as his character arc in Best Served Cold left me with a bitter taste in my mouth. More Bayaz is curious, making me wonder whether it’ll tie into the overall mythos of Abercrombie’s world a little more solidly than Best Served Cold.

Joe also updates us on the status of the novel:

I’ve just started the final part of five, and hope to have the whole first draft finished by the end of April or thereabouts. There’ll then be a period of heavy cutting down and revision in which I’ll bring the earlier parts of the book into line with how my sense of it has developed as I’ve gone along. Part of the charm of writing standalone books is that you can revise the whole thing in one go, and you’re therefore free to plunge ahead to the end, and see where you stand without worrying too much about the start. The downside, of course, is that the start then needs to be whipped into line in quite a big way. Certain themes have emerged as important and need more emphasis in the earlier sections. Certain characters have proved important and need to be fleshed out earlier on. Others have proved unimportant and need to be cut, particularly since it’s an epic kind of affair with a whole lot of characters, and a bit of simplification wouldn’t hurt. The personalities of the central cast and the methods for their writing have developed over time, and so they need to be brought into line and made consistent. The secondary characters need to be given more focused personalities, styles of expression, physical characteristics that can quickly distinguish them and lodge them in the reader’s head – particularly important when there are so many to keep track of.

This is the bit of the process I most enjoy, in fact. Taking something that’s a bit of a mess and sharpening it up, cutting it down, refining and improving it, drawing out the central points and cutting away the superfluous ones (hopefully). Taking the uncut gemstone and polishing it to a brilliant diamond, you might say. Or at any rate a flashy zirconium. Overall, I’m pretty pleased with the way it’s going. A few months ago I was concerned that it would end up really long – quite possibly my longest book yet. It’s drawn together a bit towards the end, though, and I’m intent on pruning it down as much as I possibly can in the editing, hoping to bring it in somewhere around the 210,000 mark. Still considerable, but not quite up to Best Served Cold or Last Argument of Kings, which were both around the 230,000.

Encouraging news. Every writer’s different. As someone who’s just moving on to the revising stage on my own work-in-progress, it’s encouraging to know that writer’s like Abercrombie refine their novels so heavily after the first drafts. There’s certainly a level of polish in Abercrombie’s novels that hints towards a very serious level of polishing and revising. Though his characters might hate to hear it, those novels are a labour of love, from the sounds of it!