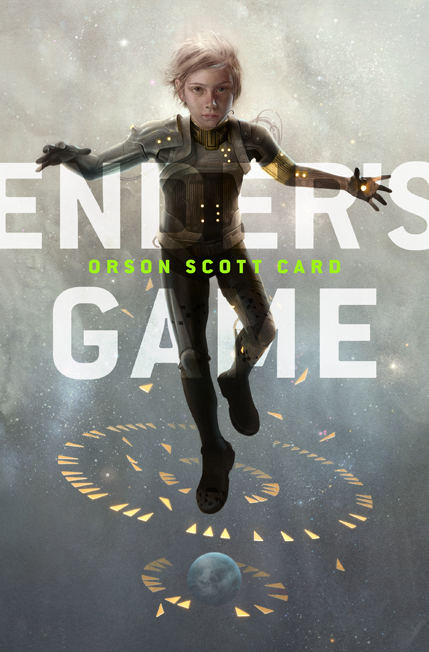 As always, Tor.com has a fantastic post about the process behind the cover, and showcases the reaction of several people close to the project. Most interesting, perhaps, are the comments of Beth Meacham, the editor of the novel, who had some concerns when she first found out that Tor was creating a new cover for the novel:

When Irene told me that she’d been cleared to create a new art package for Ender’s Game for the eBook release, I confess that I groaned. Covers for this book have always been a problem. It’s not a children’s book, but when you ask for a painting of a ten year old boy, it’s hard not to get something that looks like a children’s book. This can lead to problems, like the email I recently got from a school librarian who was sure that there was some mistake; this children’s book had “bad words” in it.

Gallo, however, wasn’t so concerned:

I had no doubt Sam could portray a boy who wouldn’t put off older readers. I have often felt a number of his paintings show a cool exterior while suppressing some kind of underlying trouble or anxiety; if anything describes Ender, that’s it. When I contacted Sam, I wasn’t surprised to hear that Ender’s Game is one of his favorite novels.

In the end I was intrigued by Sam’s use of scale in the chosen sketch. I loved seeing Ender large with an entire planet underfoot—whether it’s Earth or the alien planet, the fate of both worlds depend on this small boy. The weightlessness, of course, refers to the Battle School exercises so memorable in the book. The flat-color triangles, representing the holographic game pieces, set against the realistic rendering of Ender and the planet, enhance the lie of the game.

Upon seeing the final art, even Meacham was sold:

The sketches that I saw were very good. The artist is wonderful, and it looked very promising, though again the sketches were of children. Irene and Sam heard me when I said that if we were going to put a child on the cover, that child had to have old and wary eyes, had to look like a real child who had been under great stress. The finished art has that quality in spades. My reaction to seeing the finished art was “Oh! That’s Ender!”

The composition is spectacular, too—it actually illustrates something that is such a powerful part of the novel: Ender has been separated from Earth and humanity even as he is being forged as a weapon to protect them.

Also interesting are some of the early sketches, which are a bit more experimental:

Though I’m not a fan of Orson Scott Card, Ender’s Game remains one of my very favourite novels and I’m glad to see it getting the treatment it deserves from Tor. The typography alone makes me giddy. Now, if only they’d release the retail edition with this cover!

The wonderful art is courtesy of Sam Weber.