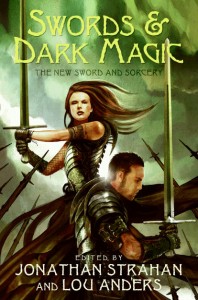 With the release of The Lies of Locke Lamora in 2006 (REVIEW), Scott Lynch made a lot of noise and quickly established himself as one of the most promising young writers in the genre. It was an impressive debut, mixing Sword & Sorcery with an Ocean’s Eleven-style heist, and was quickly followed by an entertaining (if slightly disappointing) sequel, Red Seas Under Red Skies. Since then, Lynch has been quiet, periodically popping online, but mostly working on the third volume of his series, The Republic of Theives, in silence. It’s been a hard wait; doubly so after reading Lynch’s contribution to Swords & Dark Magic. In the Stacks is an over-too-soon story that showcases Lynch’s best qualities as a writer – his wit, grasp on character and layered (but never too intricate) plotting.

In the Stacks is set in the High University of Hazar; more particularly in its library. The story follows three youths as they attempt to pass their year-end exam. Simply, they have to return a book to its place among the shelves. As expected of a Swords & Sorcery story, things are never quite so simple as they seem and the charming chaos that ensues forces the characters to stretch their magic and fight with a very unconventional weapon. The library is full of grimoire’s, and the creatures they spawn, that would like nothing less than to devour any outside presence, including the words spoken from mouths of errant students.

“Aspirant d’Courin, what is a grimoire?”

“Well,” she began, seemingly taken aback by the simplicity of the question. “As you said, a magician’s personal reference. Details of spells, and experiments–”

“A catalog of a magician’s private obsessions,” said Molnar.

“More private than a diary, every page stained with a sorcerer’s hidden character, their private demons, their wildest ambitions. Some magicians produce collections, others produce only a single book, but nearly all of them produce something before they die. Chances are the four of you will produce something, in your time. Some of you have certainly begun them by now.

“Grimoires,” continued Molnar, “are firsthand witnesses to every triumph and every shame of their creators. They are left in laboratories, stored haphazardly next to untold powers, exposed to magical materials and energies for years. Their pages are saturated with arcane dust and residue, as well as deliberate sorceries. They are magical artifacts, uniquely infused with what can only be called the divine madness of individuals such as yourselves. They evolve, as many magical artifacts do, a faint quasi-intelligence. A distinct sort of low cunning that your run-of-the-mill chair or rock or library does not possess.

It reads, well… like Scott Lynch writing Harry Potter. There’s bite to the dialogue (though it’s not as ribald as his Gentlemen Bastard Sequence), lots of action, and a suitably clever climax. The school setting, the camaraderie and even the magic system (light and nebulous as it is), are reminiscent of Blake Charlton’s recent Spellwright, but with more cheek, and a bit of a chip on their shoulder. The only low comes in the last pages, when Lynch throws an unnecessary (but, admittedly, well-established) twist at the reader that shines a different light on one of the characters. Still, it’s a small flaw amidst a wonderful story.

If there are connections to Lynch’s earlier work they are not easily noticed, but I couldn’t help but see shades of Locke Lamora and his gang of thieves among the students. Lynch’s clever prose and easy command of his characters will wrap you up, and rambunctiously steal you away to that mysterious library. In The Stacks is a strong addition to a heavyweight anthology, and promises of great things when The Republic of Thieves hits shelves in several months.