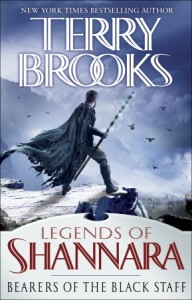 Bearers of the Black Staff

In the interest of full disclosure, I’m a moderator at the Official Terry Brooks Forums, a role which I take seriously, but which has not coloured the following review

Reviewing a new Terry Brooks book is always a taxing experience for me. On the one hand, I’m a longtime fan of his work and have trouble separating my critic sensibilities from my fanboy sensibilities. As a fan, it’s often easy to overlook shortcomings by focussing on the elements of the novels that appeal to my deeply engrained fanboyisms – those small, easter egg elements that would mean little to a new reader, but send shivers up the spine of longtime fans. On the other hand, as a critic, Brooks’ reliance on these cyclical, repeating themes, plot elements and character archetypes is something that can’t be ignored.

Bearers of the Black Staff is the opening volume of a duology (in name only, which I’ll get to later), The Legends of Shannara, that further attempts to connect his Word & Void series (a wonderfully original and darkly satisfying Contemporary Fantasy trilogy) with his decades-running Shannara series. As promised. Brooks continues to explore how our war-ravaged Earth was transformed into the sweeping magical world of the Four Lands, and fans of the series will love some of the surprises and revelations in store.

When Brooks finished The Gypsy Morph, the series was still firmly routed in our world (the Pacific Northwest of the United States, to be specific), but, 500 years later, Bearers of the Black Staff begins in a world more firmly resembling that found in the early Shannara novels – technology is almost non-existent, nature rules, swords and spears are the main weaponry in combat. In those 500 years, a religious sect has grown among the small group of survivors, based on the teachings of ‘The Hawk’ and Brooks uses this as an opportunity to explore, none-too-subtly, his views on organized religion and its tendency to forget (and blur) its original teachings as it yearns to become a governing body. It’s not a new concept to Fantasy, but it’s the first time that Brooks has dropped such open social commentaries and analogues into his work. Previously, Brooks has tackled Environmentalism and some politics, but never so openly or obviously. With views similar to my own, this didn’t bother me (and is nowhere near the level of other authors using their novels as a platform for some social or political agenda, it never gets in the way of the store), but there’s little room for interpretation and I can imagine some of Brooks’ longtime readers might take his strong philosophies and political opinions the wrong way. That said, it’s a welcome sign to see Brooks continuing to tackle more serious themes than he did in the days of the early Shannara novels, especially in light of the recognizable tropes that fill the rest of the novel.

For fans of the series, the real meat of Bearers of the Black Staff is in the familiar elements that begin to rear their heads. The Trolls, a race that’s played a maligned roll in many of Brooks other novels, are the stars of the show here, and much of their history is revealed to the reader, for the first time in the series. Their origin story, involving characters from The Genesis of Shannara is heavy-handed and would have been better left hinted at, but this is something Brooks fans should be used to by now. Astute readers will also begin piecing together hints of the Knights of the Word and their eventual transformation into the Druids that manipulate the world in later Shannara novels.

Ultimately, though, these familiar elements are also the novel’s (and Brooks’) weakest link. Terry Brooks has a vocabulary that he’s built up through his career. Not a vocabulary in the sense that you’d find it in a dictionary (though his prose isn’t exactly a bastion of variety, it’s serviceable and easy to read), but rather in elements, archetypes and plot devices that he uses to construct his stories. There’s next to nothing in Bearers of the Black Staff that we haven’t seen before in any of Brooks’ previous novel. We’ve already met:

This vocabulary extends beyond character archetypes and into plot devices (how many times can his protagonists be capture by trolls? Or stumble across their hidden talents/birthrights?) and even very specific items that always push the story forward in the same direction.

When Brooks published The Elfstones of Shannara, he took a talisman from his first novel (The Sword of Shannara) and delved into its history, expanding on the lore and mystery behind the stones and forcing his protagonist to confront his own demons in an effort to control their power. It was a fantastic follow-up to a decent novel, but also the first sign that Brooks was loathe to leave behind his creations.

Since the first mention of the blue Elfstones in The Sword of Shannara, fans have been clamouring for elfstones of other colours, and the magics they might contain. Notably, Brooks introduced the black elfstone in The Heritage of Shannara series, which offered a welcome and perverse twist on the blue elfstones. Besides this, and the its-sort-of-an-elfstone Loden (which has featured in several of Brooks’ stories now), there has been little further exploration into the elfstones and their origins, the blue elfstones simply appear in the story when they’re needed, and generally offer the same solutions to the same problems again and again. Brooks has often made claim that he’d love to explore the history of the elfstones, to introduce his readers to new colours, but has never found the right situation or story to do so. Now, this is fine reasoning – you don’t want an author to shoehorn their story into place simply to appease fans – but on closer inspection, it becomes obvious, and alarming, that Brooks is too comfortable in his tropes. And with the pressure of publishing one novel a year, one wonders if maybe he’s not trying hard enough, instead relying on what he’s already familiar with.

But the elfstones are just one example of this. Like a child’s security blanket, Brooks has elements to a story that he understands, that he’s comfortable with. They’re like worn building blocks, solid on a base level, and nostalgic for their memories, but ultimately becoming a little long-in-the-tooth. Rather than searching out new building blocks, Brooks has a tendency to just shuffle them around, give new shape to old concepts. Now, recurring themes and characters archetypes among an author’s body of work is not unusual, but when Brooks showcases his originality (Running with the Demon, for instance), he proves that he can play with the best the genre has to offer.

Getting back to The Elfstones of Shannara, it is considered by many to be his best novel, but was written on the heels of an aborted follow-up to The Sword of Shannara called Song of Lorelei. Brooks wrote the majority of this follow-up, fresh off the success of The Sword of Shannara, but had it summarily torn apart by his then editor, Lester Del Rey. Forced to go back to the drawing board, to leave the easy path and start over from scratch, Brooks wrote an amazing novel. Looking back, those character archetypes and plot devices I’ve written of were in full force, but at the time they felt fresh, like Brooks was really reaching for a story that was 100% better than his first novel. Now 20-some years, maybe its time for Brooks to stop waiting for the new elfstones, or unfamiliar stories elements, to find him, and go searching for them himself.

One other interesting note is that Brooks seems to be leaving his roots of Epic Fantasy and adopting a more Sword & Sorcery-esque approach to storytelling. In Bearers of the Black Staff, the story is pulled tightly in, focusing on a valleyful of mixed-race people and a conflict that has little (foreseen) effect on the greater world, but holds dire consequences for the small group of refugees living in their mountain sanctuary. This evolution of Brooks writing style is, perhaps, a direct contradiction to my earlier complaint that his stories are becoming cookie-cutter, but it reflects more on the pace and density of the writing and plot, rather than the building blocks that support it.

Be warned, also, that Bearers of the Black Staff is not a full novel. No matter what Brooks’ publisher claims, it is the first half of a single novel, rather than the first book of a duology. The novel ends with some light plot strings being resolved, but many more opening up and all of the major plotlines still left dangling. In a way, I’d suggest readers to hold off on Bearers of the Black Staff until its sequel is released, so they can read and enjoyed as one long novel, instead of leaving the readers with no satisfying resolution at all. A two-year cycle, with one longer novel, would benefit Brooks’ readers, if only to offer a more cohesive reading experience.

In the end, though, I couldn’t help but let the fanboy take over and I found myself enjoying the novel immensely. All those familiar elements, red flags to the critic in me, were like coming home after a long vacation. They’re nostalgic and bring back memories of first discovering Brooks’ work, an event in my life that helped kindle my love of Fantasy. Archetypes they might be, but, like a cliche, they’re archetypes for a reason. One can’t fault Brooks’ pacing, or his ability to inject fun into his stories. Taking off my coke-bottle-critic glasses and putting on those with a rose tint, I enjoyed the hell out of Bearers of the Black Staff and am greatly looking forward to its sequel, though I know what to expect.

Despite the lego-block nature of Brooks’ novels, he generally gives them just enough diversity to make for an enjoyable read, but it’s easy to lament that he doesn’t push himself more often. Veterans of the series will enjoy all the easter eggs (if they’ve made it this far, they know what to expect) and the glimpse into the evolution of our world into the Four Lands; newcomers to will find a tightly written adventure story with some philosophical underpinnings.