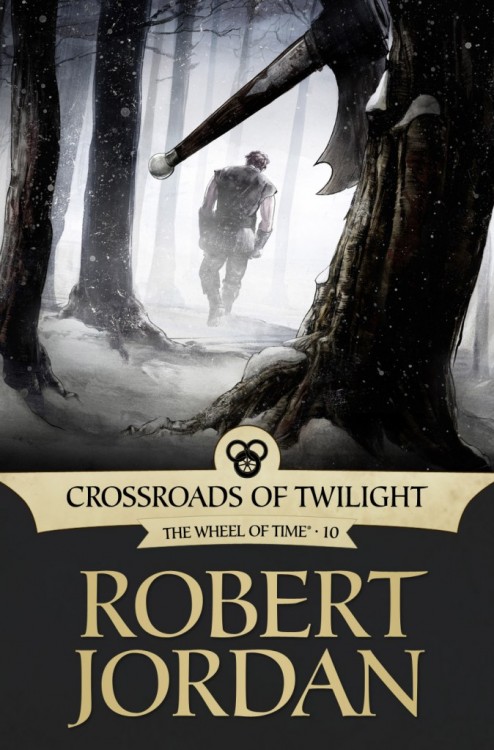 From Irene Gallo, at Tor.com:

With Crossroads, we wanted to show Perrin at his breaking point. After engaging in a despicable act he, in a fit of justifiable rage, finally chooses to throw away his axe of war. The trick was getting the moment right. Attempts to show the action came across a bit cartoony. Instead, we decided to depict the minutes just after. The point was to show what Perrin, in this character-defining moment, was leaving behind.

Striking the right emotional chord through mood and atmosphere would be no easy task. According to artist Greg Ruth, “There’s a time in winter here in New England where it’s early in the woods and the canopy of trees keeps the snow from getting too high on the ground, but it’s cold as hell and so deathly quiet. I loved the idea of trying as best as I could to convey that silence and chill as a kind of indictment on the bloody events that precede this scene. If the idea was to get the moment after the action, then the world surrounding the figure and the axe had to convey the emotion as much or more than anything else. Capturing that particular lighting was tough.”

The story of Wheel of Time is a fabric of profoundly difficult and personal decisions. In the end, Greg Ruth created a moment when a giant hero with the weight of the world on his shoulders is at his own private crossroads.

Greg Ruth‘s sumi-e styling is initially a little startling, giving the cover a bit of a cartoony, comic book feel, but as I look at it longer the heavy contrast between the white snow and the dark shadows fits the emotional tone of the scene depicted. I also love how we see Perrin through the arc of his axe, such an iconic image for his character.