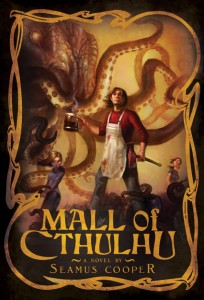 Not aware of the Night Shade Books controversy? Go read about it, then come on back.

First and foremost, we at Night Shade Books would like to apologize for any problems we’ve caused any of our authors. The last three years have been brutal on us, although not in any way we could have expected. While we’ve faced the same difficulties every small and independent press has suffered in this age of sales downturns, higher-than-expected returns, and other challenges, what has caused us the most trouble have been our successes. Night Shade has grown faster and more uncontrollably than we had any idea how to handle. What started as two guys shipping books out of a garage now consists of a full staff working out of an office in San Francisco. We’ve shuffled around a lot of our responsibilities, but in many ways, we’re still figuring this out as we go.

This has led to some major miscommunication, and sometimes flat-out lack of communication, with our authors, sometimes, even amongst ourselves. We screwed up: Details were missed, one of us assumed another was handling a situation, or a reluctance to deliver bad news turned into an unprofessional excuse to procrastinate. The issues that have come up today, at their core, are really ones of communication. All this could have been avoided through simple phone calls and emails, through us letting people know what was happening.

That said, this has been a wakeup call for us. We have been working hard to improve all areas of Night Shade Books. Perhaps not fast enough, nor in the places that needed the most work. Doing royalty statements by hand was fine when we were doing five books a year, but now, with over 150 books in print, it has become a cumbersome, time-consuming, painful process that too often has been put off until later. And, as evidenced by the two books we sold as ebooks without the proper permissions, clearly we need a better contract/rights management system. We are already working on this: Last month we hired a new employee, whose primary responsibility will be managing our contracts and subrights, as well as developing and implementing a royalty system that won’t take two people a month to run royalties. We have already addressed the issues currently at hand involving Elizabeth Moon, Brendan Halpin, and Liz Williams. We have also contacted SFWA, and will be working hand-in-hand with them to find out if any other authors have issues with us, but haven’t come forward yet, and get those problems resolved.

At this time, we would very much like any of our authors, past or present, who have or have had issues with our conduct or business practices, to step forward either to us or to SFWA, so that we can attempt to resolve any hardships we have may have caused.

Does this make their actions acceptable? No. Is everything peachy keen now? No. Is it a good step in the right direction for them to begin rebuilding burned bridges? Yeah. In a situation that could have been disastrous for the small publisher, it’s nice to see them step forward with enough integrity to say ‘We screwed up’, rather than bandy around the issue, tossing out hollow excuses and bland apologies.

As a blogger, I’ve not personally worked with Night Shade Books, but it pleases me to see a professional response to a unprofessional faux pas. Nightshade Books is, at the moment, best known for publishing The Wind Up Girl by Paolo Bacigalupi, which is appearing on many ballots for Best Novel, including the Hugo Awards and the Nebula Awards. What’s most interesting is that they cite the success of this novel (presumably, given the torrent of coverage it’s been given over the past several months) and one of the key factors that led to this breakdown in communication.

It would be a shame to see them thrown under the bus for this incident. Still, there’s much rebuilding to do, and Night Shade Books needs to make sure they use the experience to come out stronger on the other side, to show complete and utter loyalty to their readers and their writers. The first step to this recovery begins now, and this letter is the first effort to reform that chain of communication that was lost. Good luck to Night Shade Books and all their authors as they try to sort through this mess, we’re all rooting for you!