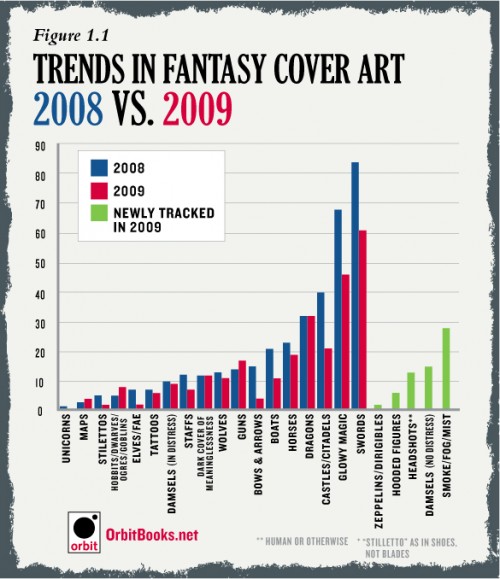 Last year, Orbit Books had a bit of fun by rounding up a huge swathe of 2008’s Fantasy novels and compiling a graph of the cliches used in the art. Now, they’re back at it, taking a look at the covers for 2009’s novels and comparing them against the novels in 2008.

It’s interesting to see that nearly all the categories dropped off (Maps, Hobbits/Dwarves/Trolls/Ogres, and Guns are the only categories to see an increase in 2009), suggesting, perhaps, that we actually saw a bit more variance in the cover art released in 2009. I think we’re all shocked by how low Hooded Figures ranked; though, if they took out the ‘hooded’ part and added in ‘hired college student wearing a cloak, labelled with a tramp stamp and/or looking menacing‘ to the list, I’m sure it’d rank near the top. I do like those ‘dark covers of meaningless’, though. We could use more of them, and maybe even add in a ‘light cover of meaningless’ or a ‘colourful cover of meaningless’ while we’re at it.

It’s an interesting, humourous look at the trends in the industry. It certainly shows that cliches are alive and well in the hearts of readers and the minds of graphic designers and marketers everywhere. Also of note is that Orbit Books will be compiling a similar graph based on the titles of novels released in 2009, which should be of equal interest.