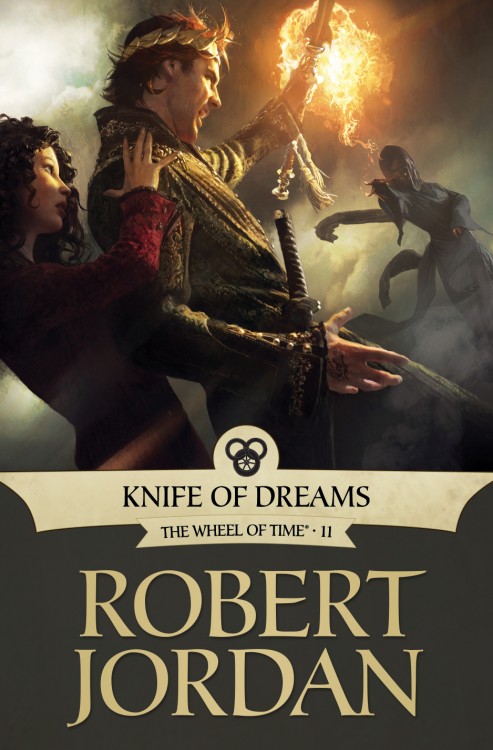 It was time to pump up the action on the covers. I knew early on I wanted to ask Michael Komarck to work on the series but I wasn’t sure which book. After talking to Jason Denzel and reading some of the fan comments, it seemed Komarck’s gritty photorealism would be a perfect fit for this sequence.

At this point in the series Rand’s physical and mental stability is breaking down. Komarck’s tight composition and unconventional angles make the viewer feel that imbalance. Komarck engages you by making you feel slightly uncomfortable, almost wishing you could take a step back to regain your composure.

In an age when a lot of noise is being made about illustration “needing” to become moving images, I would say the beauty of this image is that you are in perpetual conflict—you want Rand to regain balance, but no amount of looking will change his struggle at that moment.

Since his work on George R.R. Martin’s A Song of Ice and Fire, Michael Komarck has become one of my favourite Fantasy Illustrators working in the industry. If put in Irene Gallo’s shoes, of choosing the artists involved in the Wheel of Time eBook re-issue, he would have been one of my first choices. I mean, just look at this Lord of the Rings painting.

I’m a big fan of the Knife of Dreams cover. Great physicality, emotion, colours, contrast. Just awesome. Plus, Rand actually looks like a man in the painting, as opposed to a teenager or a boy, as befits his transformation through the series. Great stuff from Gallo, Komarck and the rest of the Tor Books art team.