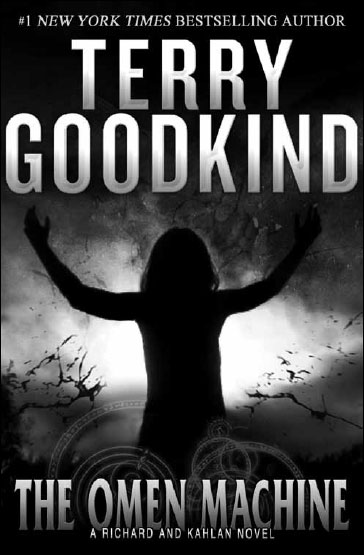 Terry Goodkind’s novels of the Sword of Truth series set a new standard for epic storytelling in a fully realized world. Now Goodkind returns to that world for a new cycle of tales, centering on Richard Cypher and Kahlan Amnell. The Omen Machine begins directly after the events of the Sword of Truth, but it starts an independent storyline. Readers who haven’t experienced the Sword of Truth novels can begin here, while longtime fans will be captivated by a new tale of the characters that fascinated them before.

Hidden deep underground for millennia, discovered only by chance, the mysterious machine has awakened, to begin issuing a serious of ominous and alarmingly accurate omens. As the wizard Zeddicus attempts to destroy the sinister device, it issues a cataclysmic omen involving Richard and Kahlan, foretelling an impending event beyond anyone’s ability to prevent it. With catastrophe imminent, the machine then reveals that it is within its power to withdraw the omen…on fulfillment of an impossible demand.

I love that it’s ‘a Richard and Kahlan Novel‘. I guess the ship has sailed on the Sword of Truth Series, though how this is anything but the 14th volume is a mystery to me. I mean it’s got Kahlan, Richard, Zeddicus, Prophecies, Omens (and Machines!), Valour, Heroism, (likely) jaw kicking and sadomasochism, and it picks up directly after the end of Confessor. Totally sounds like a new series to me.

Glibness aside, with all the Imperial Order junk out of the way, it does sound like it might recapture some of the fun and adventurousness that made the early novels in the series readable and, *gasp*, enjoyable. At least he’s not trying to hide it as a literary thirller this time around.