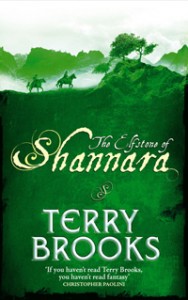 From a Goodreads interview with Brooks:

I’m working on a book that’s the first of a trilogy that takes place after High Druid of Shannara, which is in the future of the Shannara world. I’m doing something entirely new. It’s centered around a search for all of the elfstones that are referred to repeatedly in the other books. They disappeared in the old world of fairy, and nobody knows what happened to them. In this series of books we are going to find out. People have asked about this for years, so I think there will be some pretty strong interest in the story line. Just the other day I was wishing I hadn’t [already] used the title The Elfstones of Shannara, because it would be so much better if I could use it now!

One of my biggest criticisms of Brooks’ latest novel, Bearers of the Black Staff, is that he too often dips his pen back into the same inkwell, building stories with the exact same blocks time and time again. Particularly, he’s used the Blue Elfstones as a plot device in the same manner for books on end. I hoped he would one day challenge himself, and put aside those familiar building blocks to more widely explore his mythos. Sounds like I’m getting (almost exactly) what I was asking for. It’s just too bad the book won’t be on store shelves for two-and-a-half years.