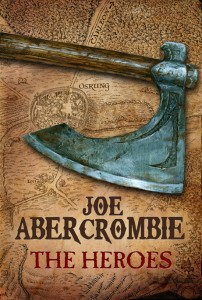 “Uh?” He opened one eye and the sun stabbed him directly in the brains. “Uh!” He snapped it shut again, wormed his tongue around his sore mouth. It tasted like slow death and old rot. “Uh.” He tried his other eye, just a crack, trained it on the dark shape hovering above him. It loomed closer, sun making glittering daggers down its edges.

“I hear you, damn it!” He tried to sit and the world tossed like a ship in a storm. “Gah!” He became aware he was in a hammock. He tried to rip his feet clear, got them tangled in the netting, almost tipped himself over in his efforts to get free, somehow ended up somewhere near sitting, swallowing the overwhelming urge to vomit. “First Sergeant Forest. What a delight. What time is it?”

“Past time you were working. Where did you get those boots?”

Tunny peered down, puzzled. He was wearing a pair of superbly polished black cavalry boots with gilded accoutrements. The reflection of the sun in the toes was so bright it was painful to look at. “Ah.” He grinned through the agony, some of the details of last night starting to leak from the shadowy crannies of his mind. “Won ’em . . . from an officer . . . called . . .” He squinted up into the branches of the tree his hammock was tied to. “No. It’s gone.”

Forest shook his head in amazement. “There’s still someone in the division stupid enough to play cards with you?”

“Well, this is one of the many fine things about wartime, Sergeant. Lots of folks leaving the division.” Their regiment had left two score in sick tents over the last couple of weeks alone. “That means lots of new card-players arriving, don’t it?”

“Yes it does, Tunny, yes it does.” Forest had that mocking little grin on his scarred face.

It’s Joe Abercrombie, no mistake. With each new novel, Abercrombie seems to be further cementing his style, to the point that his writing is distinctive enough to be recognized even without his name attached. This excerpt should enough to either A. whet your appetite for The Heroes or B. make you into a slavery, bloodthirsty fool who can’t wait until the initial release of the novel. I won’t tell you which category I fall in.

Head on over the the Orion Books/Gollancz Blog for the full excerpt from The Heroes.