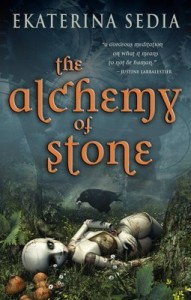 The Alchemy of Stone

I stumbled into reading Ekaterina Sedia’s The Alchemy of Stone via a twitter conversation between Paul Jessup and Matthew Delman. It wasn’t a conversation about the novel’s themes or its characterizations, nor was it even about the quality; rather, they debated tone and setting. Delman likened the setting to Eastern Europe, akin to medieval Prague or Moscow, but Jessup didn’t see the connection. Having travelled quite extensively through that part of the world (in modern times, not medieval, mind you), I was curious about the distinction, and so took the novel from the (proverbial) pile and jumped into it knowing very little about Sedia or her work.

With the tale behind me now, I’m not surprised that Delman and Jessup’s conversation so heavily leaned on atmosphere. The nameless city in which the novel’s set is as important a character as any of the other characters: human, automaton or otherwise. Through the living stone Gargoyles, Sedia gives the city a voice:

There is a house on the top of the hill – no man’s land, no-place, too steep for agriculture and too rocky for pasture, out-of-the-way and inconvenient for city dwellers and farmers both. This hill, the Ram’s Skull, the bald forehead of the once-mountain worn to a nub by time (slipping, slipping, faster and faster) is nothing but bedrock and loose stones. The house on the top sits lopsided already, its northern corner sinking with the decay of the slope under its supports

The mechanical girl and the Soul-Smoker enter the house – we hear the long squeal of a door as it opens and a slam as it closes behind them. We do not know what is happening inside, but we can guess – there is light in the fireplace and the gurgling of a kettle, and low, guilty voices. And we think of the souls and we count them – we had known every ghost in the city, and we can recall their names. We marvel at the cruelty of their fate without having the capacity to truly comprehend it – no more than to merely recognize it as grotesque. But, like the mechanical girl, we have no souls, and we are not afraid of the Soul-Smoker, we have no reason to worry that the souls inside him will somehow lure ours away and we will fall dead on the spot, abandoned by our animating essence. We think about the nature of souls and listen to the small domestic noises reaching us from the little house on top of the hill.

But the nameless city, and its gradual degradation and destruction as two warring factions wage war in its streets, isn’t the ultimate make-it-or-break-it facet of the novel. Rather, that’s Mattie, a mechanical girl, an automaton, as she’s coined in the novel, trying to break free from the shackles that society has placed on her. The reader’s willingness to buy into Mattie will likely determine their attachment to the novel. She’s a well drawn, sympathetic character, much moreso than many of the secondary human characters (the only one who comes close to her level of complexity is Loharri, who’s woefully under-explored), but, in the end… she’s also a mechanical construction with little explanation of how a gunpowder society is able to create a fully sentient, emotional and adaptable A.I. This is doubly hard to buy into when much of the crux of the novel’s plot (which happens around and despite Mattie, rather than because of her) centres around a massive computer (for lack of a better term) that is powered by coal and much less sophisticated than Mattie. I was often enthralled by her, but then she would do something too human, and I’d be whisked away from the story. Ironically, perhaps, her character would have been better served if she was more alien – Ted Chiang’s Exhalation is a brilliant example of how to draw a sympathetic but believable robotic character. Her struggles with trying to break away from the preconceptions cast on her by society were fascinating, but her emotional relationships with human characters are hard to empathize with. Ultimately, had Sedia pulled back the curtain on Mattie’s creation, and given reason for why she was so far ahead of the technology curve (and I believe there was a very ample opportunity to do this, if she’d just followed one plot string about a trio of young boys to a deeper conclusion), all of a sudden the dichotomy of Mattie’s personality and emotional abilities would have been worlds easier to accept.

At first blush, The Alchemy of Stone struck me as a strong Young Adult novel. Like Coraline by Neil Gaiman, A Wizard of Earthsea by Ursula K. LeGuin or The Last Unicorn by Peter S. Beagle, The Alchemy of Stone starts with a strong central character, an agreeable, but respectful tone, and an interesting setting; but unlike those classics, Sedia’s novel becomes more adult as Mattie’s world begins to fall apart around her. It looses none of the charm, but what begins as an innocent attempt to save the city’s gargoyles soon encompasses human/automaton sex and its emotional fallout, civil war, opium and torture.

Compare this excerpt from Chapter One:

Still, Mattie tried not to think of politics too much. She thought about gargoyles and of Loharri’s words. He called them their overlords, even though the city owed its existence to the gargoyles, and they had been nothing but benefactors to the people. Did he know something she didn’t? And if he were so disdainful of gargoyles, why did he offer to help?

Mattie walked leisurely along the river. It was a nice day, and many people strolled along the embankment, enjoying the first spring warmth and the sweet, dank smell of the river. She received a few curious looks, but overall people paid her no mind. She passed a paper factory that squatted over the river like an ugly toad, disgorging a stream of white foam into the water; a strong smell of bleach surrounded it like a cloud.

to this excerpt from Chapter Thirteen:

“Afraid of being home all by yourself?”

“No.”Afraid of being home with someone else, she thought, but never said it out loud. “Eat your sandwich.”

He obeyed, still smiling. “You don’t hate me as much as you make out, do you, Mattie?”

“Don’t talk with your mouth full,” she said. “And I never said I hated you.”

“You make a fairly good impression. No words needed, dear girl, and you know full well that I’m not entirely dim. Surely, you expected me to pick up on some of your mannerisms.”

He didn’t think her dangerous – if he did, he wouldn’t joke about it and pretend that her anger was indeed a concern to him. He occasionally enjoyed making a show out of capitulating to her, but only because they both knew he held more power. “Not any more, Mattie thought.

It’s difficult to capture in just a couple of pulled quotes, but it’s a subtle evolution through the novel, and masterfully handled by Sedia, but certainly not something I’d read to my children as I’d first thought when opening the novel. This growth and change in tone develops alongside both Mattie’s evolving maturity and the city’s fall into anarchy, and there’re some lovely reverse parallels as Mattie grows up and the humans around her devolve towards their baser instincts.

For all its strengths in atmosphere, prose and originality, The Alchemy of Stone has its share of struggles, too – mainly, the underdeveloped nature of nearly every character and plot string in the novel. They’re all interesting, and Sedia certainly has the gumption to come up with great characters and scenarios, but it often felt as though the novel was an outline of something much bigger. The early drive of the novel is Mattie’s endeavour to set the city’s Gargoyles free. There’s an intriguing little metaphor here, as, unable to free herself from the shackles of her own prison (a winding key, held by her emotionally damaged creator) she struggles to give freedom to another group, who’re slowly dying as the world they’ve crafted is left in the dust of advancing science and civilization. It’s a good story, and more than enough to build a novel around, but by the end of the novel it seemed liked little more than an aside compared to the destruction of the city. We’re never really given a solid reason why we’re supposed to care about the Gargoyles, beyond that Mattie does, and their history is so shrouded that it goes beyond mysterious into, simply, underdeveloped. They often make references to Mattie and how she’s the only one who can save them, but there’s never any reason given to why this is so. The reader has absolutely no stake in the Gargoyles or their continued survival.

On top of this, the motivations of nearly all the characters are just as cloudy. Mattie makes friends with several people, all of whom are important to their respective sides in the struggle for control to the city – unfortunately, it’s often hard to fathom why a well-to-do courtier is fighting with a resistance group, why an exiled mechanic is fighting against his peers, or why a foreigner is caught up in the trouble at all. I imagine Sedia had grand plans in her head for how all the relationships in the novel would intertwine (in a way similar to Zafon’s universally-lauded The Shadow of the Wind), but in the end she simply didn’t have enough room to develop any of them significantly. Most heartbreaking is the allusions to the past relationship between Ilmarekh and Loharri, a tale of two childhood friends that seems to be heading to a climactic conclusion, but simply putters out with more questions raised than answered.

Rather than telling the story directly, The Alchemy of Stone skirts around it, observing the story from the outside, instead of getting right into the heart of it. Sedia is obviously making a point about technology and it’s booming advance as it takes over as the main obsession of our civilization, but she dances around the subject too lightly, and does so with a character that’s just hard enough to empathize with. It’s not often I say it, especially about an author so versed in short fiction, but had Sedia taken a bit more time, added 50-100 pages and fleshed out the relationships and conflicts in the novel, it’d likely be more successful at conveying her themes.

By casting The Alchemy of Stone through the light of a pair of non-human eyes, Sedia allows herself to analyze the human condition from a distance. As Mattie tries to separate herself from her mechanical roots, the reader’s often left to wonder why she’s so eager to become human, to adopt all our illogical, subjective tendencies. It’s a flawed novel, but also an enjoyable one and Sedia shows that she has the ability to write with originality, flair and tone; it just doesn’t gel quite perfectly in The Alchemy of Stone.