Knicked from The Mad Hatter: 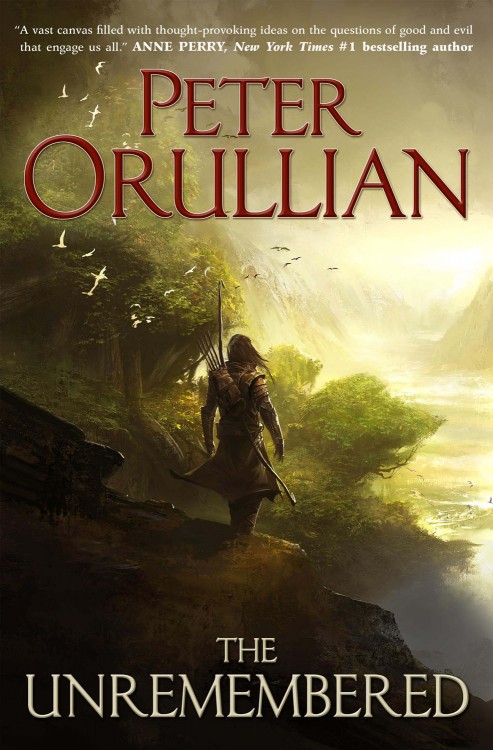 The gods, makers of worlds, seek to create balance—between matter and energy; and between mortals who strive toward the transcendent, and the natural perils they must tame or overcome. But one of the gods fashions a world filled with hellish creatures far too powerful to allow balance; he is condemned to live for eternity with his most hateful creations in that world’s distant Bourne, restrained by a magical veil kept vital by the power of song.

Millennia pass, awareness of the hidden danger fades to legend, and both song and veil weaken. And the most remote cities are laid waste by fell, nightmarish troops escaped from the Bourne. Some people dismiss the attacks as mere rumor. Instead of standing against the real threat, they persecute those with the knowledge, magic and power to fight these abominations, denying the inevitability of war and annihilation. And the evil from the Bourne swells….

The troubles of the world seem far from the Hollows where Tahn Junell struggles to remember his lost childhood and to understand words he feels compelled to utter each time he draws his bow. Trouble arrives when two strangers—an enigmatic man wearing the sigil of the feared Order of Sheason and a beautiful woman of the legendary Far—come, to take Tahn, his sister and his two best friends on a dangerous, secret journey. Tahn knows neither why nor where they will go. He knows only that terrible forces have been unleashed upon mankind and he has been called to stand up and face that which most daunts him—his own forgotten secrets and the darkness that would destroy him and his world.

Kekai Kotaki, once again proving why he’s one of the best in the Fantasy art business. I’ve been a fan of his since I first saw his art for the Guild Wars RPG series, and I’m more a fan every day. I also appreciate that Tor Books lets Kotaki’s art speak for itself, rather than adorning it with overblown typography. Beautiful.

The book itself sounds good (as much as I’ve grown broader in my tastes, I’m still a sucker for big Epic Fantasy; plus, like forests and bows and stuff. Reminds me of Elves in D&D, which I’m also a sucker for). I dunno about that title, though. How do you ‘unremember’ something? Nevertheless, I’m sure the book will let us know. Lord knows I’ve ran across a few things on the Internet that I’d like to ‘unremember’… not to mention a few novels.