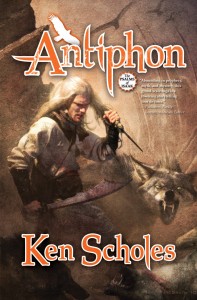 From the Tor Newsletter:

Readers clicking through the Kindle edition of Ken Scholes’s Antiphon, book three in the Psalms of Isaak, got a strange surprise in chapter 16: the book suddenly became Personal Demons , a new urban fantasy by Lisa Desrochers. Phone calls were made and new files uploaded, but Ken Scholes had a funny thought: how would the gypsy king Rudolfo really deal with the unexpected appearance of Lisa’s teenage trio? Thus was born chapter 15.5, “Intersections and Interlopers.”

And and excerpt from the chapter:

A cold wind moaned outside the command tent and Rudolfo blessed the warmth of his small furnace and the warmed cup of firespice he held loosely in his hands even as he considered the girl who stood with Lysias before him.

She was fetching enough, if young. Her garb was unlike anything he’d seen before and certainly not appropriate for deep winter in the northern reaches of the Ninefold Forest. She was short, with fair skin, long blond hair and blue eyes. And she wore clothing entirely unfamiliar to him. Her top—a sleeveless cotton bit—revealed more skin than was appropriate for winter or for most audiences with a king. And her pants were tight and made from a faded blue material. Her shoes were like nothing he’d seen before. But still, fetching she was despite her odd dress. With a few more summers behind her, she’d certainly become the type of woman he’d have pursued. Of course, since Jin Li Tam had fallen into his life he’d lost his appetite for any others, much to the disappointment of his former lovers. But there was something in the way she stood before him now that reminded him of his red-headed queen.

His eyes narrowed and he took a sip of the liquor, savoring its burn as it trickled down his throat. “Tell me again,” he said slowly. “Who are you and what are you doing in my forest?”

The slightest trembling of her lower lip was the only telltale sign of her fear. When she spoke, her voice was clear. “My name is Frannie Cavanaugh….” Her words failed and he watched her find them quickly. “And I don’t know.” She paused. “I’m not even sure what forest this is.”

Hah, this is absolutely classic. What a fun way for Tor Books and the two authors to work through a tough situation! You can read the whole chapter, which successfully spawns the broken Kindle version into it’s own spin-off series, on Tor.com. It’s good fun even if you’ve never read either of the authors before.