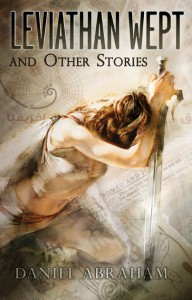 Humanity has colonized the planets – interstellar travel is still beyond our reach, but the solar system has become a dense network of colonies. But there are tensions – the mineral-rich outer planets resent their dependence on Earth and Mars and the political and military clout they wield over the Belt and beyond.

Now, when Captain Jim Holden’s ice miner stumbles across a derelict, abandoned ship, he uncovers a secret that threatens to throw the entire system into war. Attacked by a stealth ship belonging to the Mars fleet, Holden must find a way to uncover the motives behind the attack, stop a war, and find the truth behind a vast conspiracy that threatens the entire human race.

I’m not shy about my love for Daniel Abraham’s Long Price Quartet. Though I’ve only read the first two volumes (I’m pacing myself, otherwise I’d devour the whole thing and look back in sadness at what I’ll never get to experience again for the first time), it’s easily one of my favourite series off all time. If the final two volumes are of an equal quality to the first two, I have no qualms saying it’s the finest finished series published in the last 25 years. Needless to say, I’m excited by both The Dragon’s Path, the first volume in The Coin and the Dagger, published under Abraham’s real name, and Leviathan Wakes, the first volume in The Expanse Series, a Science Fiction cycle he’s writing alongside Ty Franck under the pseudonym ‘James S.A. Corey’. Then, of course, he’s also got an Urban Fantasy series that he writes under the name ‘M.L.N Hanover’. It’s kinda unfair that the guy can write so fast and produce such quality. For all the praise Brandon Sanderson gets, Abraham’s accomplishments are no less noteworthy.

To me, a reader whose experience with Science Fiction isn’t nearly what it should be, what intrigues me most about Leviathan’s Wake is Abraham’s restraint in his vision of the future. There’s no interstellar travel, as seems to dominate much of Space Opera, and neither does it look like he’ll be relying on aliens to wow his readers. Like The Long Price Quartet, it seems like Abraham discovered a story he wants to tell and then found the suitable setting in which to tell it, rather than letting the setting dictate the plot.

Of course, we’ll get a stronger impression of Leviathan Wakes as its June, 2011 release date draws closer.