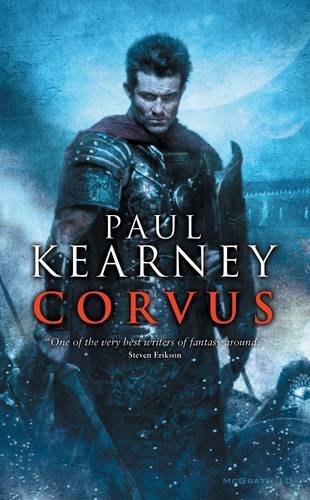 It is twenty-three years since a Macht army fought its way home from the heart of the Asurian Empire. The man who came to lead that army, Rictus, is now a hard-bitten mercenary captain, middle-aged and tired. He wants nothing more than to lay down his spear and become the farmer that his father was. But fate has different ideas. A young warleader has risen to challenge the order of things in the very heartlands of the Macht. A soldier of genius, he takes city after city, and reigns over them as king. What is more, he had heard of the legendary leader of the Ten Thousand. His name is Corvus, and the rumours say that he is not even fully human. He means to make himself absolute ruler of all the Macht. And he wants Rictus to help him.

Though my experience with The Ten Thousand was troubled (and well documented), I look forward to taking another look at Kearney’s work, especially now that I’m a more discerning reader and reviewer. For what it’s worth, The Ten Thousand has, despite my reservations, stuck with me longer than most other novels, which is reason enough to read Corvus.

Solaris has posted the opening chapter of Corvus as a downloadable PDF. Also, if you download it, you might just find a nice (if ironic) surprise on page two!