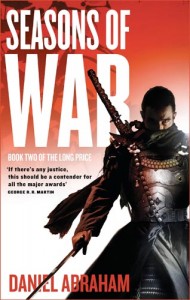 A user on the Westeros message board, where Abraham is known to post on a semi-frequently basis, has spilled some of the beans about The Dragon’s Path, the first volume of Abraham’s upcoming The Dagger and the Coin series.

It’s a very different project from the LPQ in tone, but all of Daniel’s unique personal hobby horses still show up. I mean, it is epic fantasy with dragons and trolls and sword fights and magic and dread elder gods and, damn, the whole enchilada. But it also concerns itself deeply with things like how banks form, and how control of money controls the actions of princes. I don’t know anyone else who’s that comfortable doing that sort of genre mixing.

While some fans of Abraham’s The Long Price Quartet might feel a bit maligned that he’s turning his talents towards a more traditional story and setting, it’ll be encouraging for them to hear that he’s doing it with the same sophisticated aplomb expected from the under-read author. If there’s any justice in the world, the more traditional hook will be an easier sell to booksellers and readers, leading many more people to discover Abraham’s wonderful novels.

Myself? There’s not much I enjoy more than smart Epic Fantasy. If you handed me A Dance with Dragons, The Wise Man’s Fear and The Dragon’s Path all at once (as could happen, with all three pending a 2012 release)? Mr. Martin and Mr. Rothfuss would have to get in line, cause Abraham’s at the top of my list.