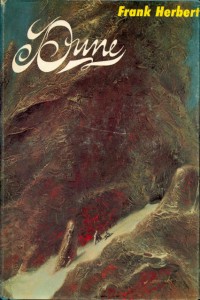 Yesterday, I hooked into the twitter hivemind and posed a question:

Now, of course, that’s not entirely true. I have read Science Fiction, but my experience in the genre is, well… lacking. Rather, I was curious to see what people would consider the staples and foundations of the genre. Would we see a lot of recommendations for contemporary Science Fiction? Or aging classics? Space Opera or Dystopian Fiction? It’s an incredibly varied genre, and, predictably, the responses were just as broad, with a few authors/series popping up with some regularity.

@ALRutter — When I asked my housemate the same question a few years back, he said Pandora’s Star [by Peter F. Hamilton]. Never looked back since.

@EwaSR — I, Robot [by Issac Asimov] and any [John] Wyndham. And I’d want to recommend the Forbidden Planet film as well.

@BookwormBlues — The first scifi book I read was The Reality Dysfunction [by Peter F. Hamilton], but I have a feeling most people wouldn’t start w/scifi there.

@Pabba — The Gods Themselves by [Issac] Asimov. Crazy alien relationships!

@pmisir — Hyperion by Dan Simmons or Lathe of Heaven by Ursula K. LeGuin…

@Netrunnr — Hyperion by Dan Simmons, anything by Peter F. Hamilton or Neal Asher

And, oddly, a recommendation for The Hobbit!

Quite a list, huh? I was both thrilled (yay, variety!) and chagrined (but, where do I start?) to see such a broad range of authors and novels represented in the responses. Card, Hamilton, LeGuin and Asimov show up a few times, but with several books from each author being recommended, indicating that even within the libraries of the genre’s best, there’s no obvious place to begin. Lots of classics, several newer novels (published post-1990, say) and a well-rounded representation of male:female authors, a rather encouraging endorsement of the genre. I am proud to say I own copies of most of the mentioned novels, even if I haven’t read them. Does the list give me one or two novels that are definitively the starting point for Science Fiction? Nope, but it does populate a list that would keep voracious readers busy for a while.

As for my own choice? Easily Ender’s Game by Orson Scott Card. It’s accessible enough for newcomers, but so steeped in the tennets of what makes Science Fiction so successful that it’s an instant classic that works equally successfully for both fans and non-fans of the genre. I’ve never read any of the sequels, and never really felt compelled to — Ender’s Game works so well as a standalone novel that I’ve always felt that any sequels would only cheapen the original story.

So, then, what novel(s) would you recommend to someone just dipping their toe into Science Fiction? Did we miss any? Should some of the novels listed above been left off?