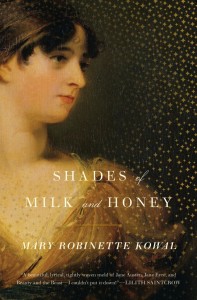 I recently overheard some professional writers talking about NaNoWriMo and a number of them thought it was a waste of time and that the folks who did it were wannabes.

Okay, I’ll admit it, I’m one of those guys who thinks NaNoWriMo is a waste of time. For myself and writers exactly like me. See, I don’t begrudge people getting excited about writing, or taking part in NaNoWriMo, but I encourage quality over quantity in my personal creative endeavours and NaNoWriMo discourages such thinking. In my opinion, it’s better to write a really good 6,000 word short story over the span of a month than a shitty 50,000 word novel.

Of course, that’s assuming that the 50,000 word novel is shitty. Kowal, on the other hand, has a very different opinion: her debut novel, released to much critical acclaim, started life as a NaNoWriMo project.

I’ve “won” NaNoWriMo three times and gave myself that structure for a fourth novel because I like writing to a deadline.

Here’s how I approached NaNoWriMo when I wrote Shades of Milk and Honey.

The point of NaNoWriMo isn’t to have a finished, ready-to-submit novel on December 1. It’s to get that first draft down on the page and stop talking about writing it someday.

Similarly, John Scalzi has some stern words for those who shake their head at NaNoWriMo contributors:

One of the kvetches I’ve seen from the pro set about NaNoWriMo is that writing a novel only in one month, once a year, is not the way pros do it, and it sets a bad example for up and coming writers. And my own response to that is, well, maybe that’s not how you do it. But you know what, in 2009 I wrote one novel, and I wrote in about five weeks very much on a NaNoWriMo plan of writing a certain volume of words per day, and then for the rest of the year I did and wrote other things. I have to say it worked out pretty well for me. And I’m fairly sure I qualify as a pro. I mean, I’ll have to check. But for now let’s assume I am.

Is it going to work for everyone? No. Is it going to be useful for everyone? No. But it’s going to be useful for some, and that’s fine – the ones it’s not useful for will find some other way to climb that mountain. Meanwhile the skills that those it works for learn — write every day, keep writing, get that story done – are skills that are transferable outside of the NaNoWriMo context and will be a benefit when that new writer, having completed the task of writing 50,000 words in one month, decides to try to write 100,000. In April. Or whenever. Yes, there may be some people who fetishize NaNoWriMo or take less than useful lessons from it (“Novels must be 50,000 words! They must only be written in November!”), but let’s entertain the notion that this will be more about those particular people than it is about NaNoWriMo.

And that’s where I was always getting caught up. Writing’s such an insular experience, especially for aspiring authors–most of whom don’t have the opportunity to rub elbows with dozens of other writers at conferences or in the online space–that it’s so easy to forget how diverse we all are in our motivations, techniques and goals. NaNoWriMo won’t ever be right for me as a writer. But, if it encourages and enables someone like Kowal (an established and lauded short fiction writer) to begin and eventually complete a debut novel like Shades of Milk and Honey, it’s hard not to find value in the process. Maybe the end result of most NaNoWriMo experiments are unmitigated disasters, but the confidence potentially derived from those failures could be worth years of rejected short stories.

So, what are your experiences with NaNoWriMo? Have you written a story? Given up after a few days? Found fame and fortune as a result? I’d love to hear stories.