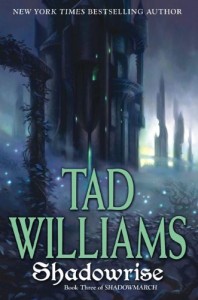 My path to becoming a Tad Williams fan is a twisted affair. Not in the macabre sense, but in the I-got-lost-a-few-times-along-the-way sense. Way back in highschool, I was foolishly determined to like his books. I don’t know what prompted it, I just had this idea in my head that I was a big Tad Williams fan. There was a problem, though: every time I tried to read Memory, Sorrow and Thorn, I put it down midway through. Sometimes I’d finish The Dragonbone Chair, sometimes I’d drop it half-way through, unfinished, unmotivated. I think I did this three times. No matter how hard I tried, no matter how hard I wanted it, the tale just wouldn’t click with me.

But, I’m a stubborn asshole, even at the best of times. Still determined to enjoy Williams’ work, I eventually picked up Shadowmarch, the first volume in a new Epic Fantasy trilogy* and, finally, after years of trying, I really loved a Tad Williams novel. There were no more released volumes in that series, so I went back to The Dragonbone Chair for a fourth go around… and fell head-over-heels in love. After that, I burned through the rest of the trilogy and it stands, to this day, as my favourite completed Fantasy series of all time. I knew there was a Tad Williams fan inside of me, it just took a little bit of time and perspective to drag him out.

So, the Shadowmarch novels hold a special place in my heart. I recognize now that they’re not quite so genre-defying as Memory, Sorrow and Thorn (hell, those novels inspired George R.R. Martin to write A Song of Ice and Fire!), nor does it have the mythological gravitas that made Memory, Sorrow and Thorn so entrancing, but there’s something special about the series that has become more evident in its third volume, Shadowrise.

Williams has played with the idea of mythology and gods before, but the Shadowmarch series puts the concepts and philosophies at the heart of its story. In the first two volumes, the world’s mythology was established, but it was hard as a reader to tell how the tragic, incestuous relationship between three fallen gods was really going to affect the overall plot of the series. There’re no such problems after having read Shadowrise, the third volume in the series, which turns the focus from the wars (both Civil and Total) to really exploring the gods, their downfall and its relationship to Southmarch Castle and the mysterious Qar. Most notably, Williams explores the idea that even religions that share the same root mythologies can often warp and manipulate those tales to fit their political and spiritual needs. It’s a very adult approach to religion and offers interesting social commentary by enhancing the plot, rather than getting in the way of proper storytelling.

Unlike the second volume in the series, Shadowplay, there’s noticeable progression towards the conclusion of the series. One might pin that on the series’ roots as an episodic novel, released to subscribers on Williams’ website, before being fleshed out into a traditionally published series. There’s a sense that through the first two volumes that Williams was, perhaps, searching for the true story within the meandering plot. With Shadowrise it’s clear that he’s found that story and he’s running with it. Secrets (of which there are many) are revealed and subsequently made even muddier when characters meet, part ways or stab each other in the back. It’s a wonderful labyrinth of characters, mythology, family, love, war and anger. After the disappointment of Shadowplay, Shadowrise sets the series firmly back on track and promises for one hell of a conclusion with Shadowheart as all the world’s forces collide outside the walls of Southmarch Castle.

The real stars of the novel are the Qar. Williams’ analogue to the mythological Tuatha Dé Danann, kicked from their ancestral home by ever ambitious humans; their history is melancholy and powerful and I was often left pondering who the true villains of the series are. It’s the touch of a true world-builder and storyteller.

Unfortunately, because Shadowrise was originally supposed to be the final volume in the trilogy, but was then split into two volumes, the novel just sorta ends. There’s a big plot revelation in the final chapter, but no proper climax and denouement leading into Shadowheart. It’s more a casualty of the publishing industry than an indictment of Williams’ storytelling, however. The story ramps up with every chapter and the pace is much improved over Shadowplay.

If you can’t already tell, I was absolutely floored by Shadowrise. I went into the novel with some slight trepidation, but all my expectations were easily surpassed. If you’ve made it through the first two volumes of the series, rest assured that Shadowrise fixes all the ailments of its predecessor and though it might not be the best Williams has ever wrote, it’s the best of the series so far. Cracking open a new Tad Williams novel is like sitting down with an old friend over beers, it’s immediately familiar and takes only seconds to fall in love again. The finish line is in sight, and Shadowheart can’t come soon enough.

* It was a trilogy at the time, then divided into four volumes for publishing purposes