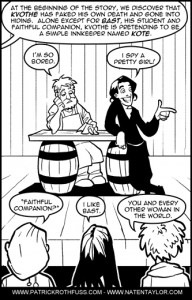 Alongside, well… everybody, I’ve been looking forward to finally getting my hands on The Wise Man’s Fear, Patrick Rothfuss’ sequel to his super-debut The Name of the Wind, for years. When I received my copy a couple of weeks ago, I dallied with the idea of re-reading The Name of the Wind for the first time since it was first released. After three years, I was understandably rusty on some of the finer points of the story. But that dalliance lasted only about 15 seconds before I cracked under the pressure and started reading The Wise Man’s Fear. I tried to hunt down a detailed synopsis but could only find the inadequate one on Wikipedia. Alas, I pushed ahead anyway.