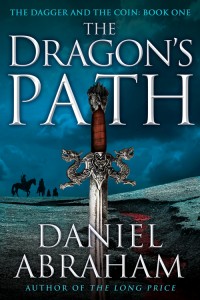 Today, I woke up to find an interesting comment on my review of Daniel Abraham‘s The Dragon’s Path.

One of my readers, Jim Cormier, had this to say:

What’s unfortunate is that despite all of the great new authors that seem to have sprung up in the last few years, the criticisms leveled against Abraham (and presumably Tor’s decision to drop him) suggest that the genre is still in a sad state. I’ve only just finished A Shadow in Summer, but I can’t see how anyone of even marginal intelligence would have trouble “grasping” the poses Abraham worked into the primary culture. He describes it organically but in a way that makes it perfectly obvious how the custom works. It also seems inspired, at least in part, by the nuances of Japanese bowing, something that many people might know anyway. The feeling of some that readers might not understand something this basic seems to be another example of the publishing world vastly underestimating its audience and prioritizing the lowest common denominator.

I remember reading reviews of the Long Price Quartet before beginning the first book: most of them mentioned how amazing it was that Abraham worked economics into the plot of his story. Going into it I was expecting some kind of complex, macroeconomic subplot involving finance and evil market influence. I was surprised to find that the “economics” referenced by the reviews referred to the simple (but effective) point that the Khaiem, having yet to invent the cotton gin, rely upon their andat to clean the seeds from cotton instantly, thereby making them a dominant force in the cotton market.

It’s a great idea, it works, and I respect Abraham’s originality and talent, but the fact that this was seemingly all viewed (at least by publishers and some critics) as being beyond the grasp of fantasy readers is sad. The reason we don’t have more authors like Abraham is not because they don’t exist but because so few publishing houses are willing to take risks on stories that don’t fit a stereotypical fantasy pattern.

Even writers like Joe Abercrombie, whose work I love, seem to have become the successes they were because they were willing to work from the inside out: writing something that bore the hallmarks of traditional epic fantasy but twisted to produce something new.

It makes me wonder: do publishers see fantasy fans as somehow “dumber” than science fiction? I can think of any number of science fiction stories that involve extremely complex scientific and even economic ideas, yet those authors aren’t set apart for those complexities.

Instead of responding there, where the conversation would not be seen by the majority of my readers, I thought it would be interesting to open the board to the community, so we can discuss as a group this idea that Fantasy is being held back by a perception that the genre and its readers are not as smart as Science Fiction and its audience.

To those of you who read both Science Fiction and Fantasy, would you say that one genre taxes you more than the other? To those who write Fantasy, how do you respond to this allegation that smart Fantasy exists but isn’t being published?

Is Fantasy dumber than Science Fiction?

So what do you think?