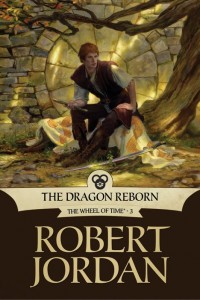 Yarr! There be spoilers for the series ahead. Ye’ve been warned!

When Robert Jordan originally pitched the idea of Wheel of Time to his publishing company it was supposed to be a trilogy. In the outline, the first novel was supposed to end with Rand claiming Callandor. Uh, yeah. In reality it took just shy of 2,137 pages or 824,372 words for Rand to claim that glowing sword in The Dragon Reborn. Readers often complain about the turgidness of the middle volumes in the series, but it’s evident even in the early volumes that Jordan had bitten off much, much more than he could chew in the space he felt he had. He proposed a trilogy, Tor Books told him six books. We all know how it’s gone since then.

The Dragon Reborn is an interesting book in the cycle for many reasons. Most prominently, it’s the first time we really realize that Rand, though the catalyst of the entire plot, is just one facet of the series. Removed from most of the action in The Dragon Reborn, Rand’s compatriots take centre stage and, in my opinion, the series is improved by this shift in focus. You see, despite how obnoxious some of the characters can get later in the series, many of the other secondary characters like Mat, Mazrim Taim and Aviendha are where the true strength of Jordan’s story resides. See, I don’t really care for Rand all that much. As I mentioned in my review of The Great Hunt, I’ve alway found it difficult to connect with Rand. Despite all of his demons, he’s always been less interesting than the voices in his head — vanilla to Mat’s Chocolate or Moiraine’s Rocky Road. In a story so large and centred around the standard ‘good vs. evil’ archetype, a character like Rand might be necessary, but I don’t believe the story would be as effective if the reader was meant to be more emotionally connected to Rand. He both hurts and helps the people around him, and it’s through their pain and joy that we experience the true value of Rand’s impact on the story.

Consequently, the star of The Dragon Reborn is Matrim Cauthon. Having read the series, my impression of Mat was always based on the hybrid of scoundrel and altruistic (if reluctant) hero we see him evolve into. It was a bit disheartening, then, to see how obnoxious and bland he was in the first two volumes of the Wheel of Time. Thanks to his healing at the Tower, Mat finally comes out of his shell and almost immediately becomes the charming rascal we expect of him. After all the doom-and-gloom from Rand and Perrin and the we’re-little-girls-giggling from Egwene and Elayne, Mat’s struggles to balance his self-preservation and his heart of gold are both amusing and, most importantly, believable. We’ve all known someone like Mat.

“But I’m free of the bloody dagger,” he mumbled. “Those bloody Aes Sedai said I was.” He wondered how much he had won tonight.

When he dug into his coat pockets, he found them filled with loose coins, crowns and marks, both silver and gold that glittered and glinted in the light from nearby windows. He had two purses now, it seemed, and both fat. He undid the strings, and found more gold. And still more stuffed into his belt pouch between and around and on top of his dice cups, crumpling Elayne’s letter and the Amyrlin’s paper. He had a memory of tossing silver pence to serving girls because they had pretty smiles or pretty eyes or pretty ankles, and because silver pence were not worth keeping.

Not worth keeping? Maybe they weren’t. Light, I’m rich! I am bloody rich! Maybe it was something Aes Sedai did. Something they did Healing me. By accident, maybe. That could be it. Better that [sic] the other. Those bloody Aes Sedai must have done it to me.

The further I get into the series, the less I enjoy Jordan’s prose. It’s serviceable, but having read authors like Daniel Abraham and Rachel Swirsky, who can use language so succinctly and so powerfully, Jordan’s prose seems bloated and bland in comparison, often getting in the way of just telling the damn story. But there’s just something about Mat’s view of the world that loosens up Jordan’s prose. It’s still overlong, but being in Mat’s head and seeing the world through his eyes helps Jordan’s world come to life. I’ve heard that Sanderson has had trouble capturing this voice in the later volumes of the series, which is a shame, if true, but not surprising.

Re-reading the series confirms one of the suspicions I’ve always had regarding Jordan’s massive success. His novels are, generally, when considered front-to-back, only okay. There are moments of greatness. There are moments of mundane storytelling. There are endless moments of bad exposition and overly detailed descriptions. But, and it’s a very big ‘but’, almost without exception, they all end with an enormous bang. While reading The Dragon Reborn, I flip-flopped back-and-forth quite frequently about the idea of continuing with the series. Until I reached the end. Despite my earlier reservations, spending an above-average amount of time reading the novel, and having copies of several eagerly anticipated novels sitting on my bedside table, through the last 150 pages of the novel I had an insatiable urge to just throw everything else aside and pick up the fourth volume of Wheel of Time. Jordan’s endings are so big, and leave the reader so invested in the story that it’s easy to forget the shortcomings of the middle pages and give in to the idea that the next thousand pages will be as exhilarating as the previous 150. It’s no wonder that the series has earned such an addictive reputation among its fans. It’s like boring sex culminating in one hell of an orgasm.

Of the three volumes of Wheel of Time that I’ve re-read, The Dragon Reborn was the rockiest ride. It had some of the highest highs (Mat coming out of his cocoon) and lowest lows (the infamous ‘braid tugging’ makes its first appearance), but it was, ultimately, enjoyable. Because of that ending, this re-read project will continue to truck on and, hopefully, I’ll enjoy the journey regardless of the potholes along the way.