Nicked from The Wertzone: 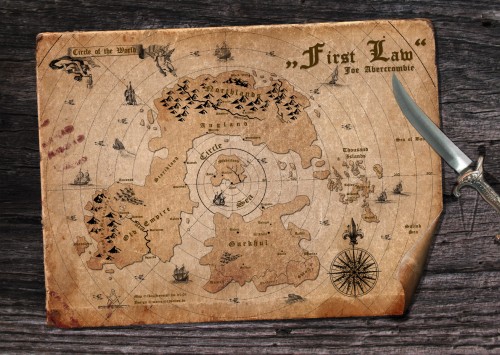 Since the publication of the first volume, fans of Joe Abercrombie’s The First Law were always clamouring to get a map of his world. Abercrombie, contrary as always, would not crumble under the weight of their pleas.

Since then, with Best Served Cold and The Heroes, fans have been treated to several (very beautiful) maps of various regions of Abercrombie’s world, but never the whole thing. Until now… sorta.

Using references in the text (and the map from Best Served Cold as a starting point, artist Scubamarco of Germany, has illustrated a lovingly rendered map of Abercrombie’s world that is, as far as I can tell, accurate to the text of The First Law and its pseudo-sequels (if not exact to the image in Abercrombie’s head).

If we’re lucky, an artist like Scubamarco should be snapped up quickly by the major (and smaller) publishing houses. This map’s better than a whole lot of the junk that appears in a lot of Fantasy novels.