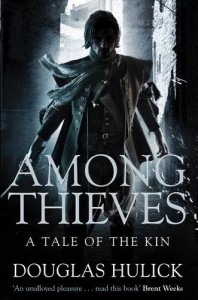 First, I want to thank Aidan for inviting me to blog over here on A Dribble of Ink. It’s terribly flattering when someone trusts you enough to ask for your help in maintaining a blog they’ve worked so hard on over the years. It’s like being asked to house-sit, only there isn’t any booze to steal or plants to ignore. Which is a bit of a let-down, now that I think about it.

So, Lesson Number One: Guest blogging — not as fun as wrecking someone else’s house while throwing a huge party, but better than sitting around your own place watching TV.

That being said, Aidan was good enough (at my request) to come up with a list of possible topics for me to write about. Things like how my life has changed now that I am published author; or whether I might want to write about one of my literary influences; or what it was like to take a familiar character trope (the thief) and try to put a fresh spin on it.

These are great suggestions. In fact, they’re so good I may steal them for use on my own blog at some point (assuming, you know, I start one). I’m particularly intrigued by the whole “new spin on the thief” thing, because I haven’t consciously thought about it that much.

But if I’m going to steal them for later use, that doesn’t exactly help me right now, now does it? Which leads us to…

Lesson Number Two: If you’re going to steal someone’s suggested blog topics in hopes of making your own (eventual) blog more interesting, be sure you have something much more banal to write about on their blog, thereby giving the readers a reason to abandon the original blog for yours.

So, rather than use any of Aidan’s suggestions, I’m going to take a moment and talk about reviews from the vantage point of a newly published author. (You see what I just did there? How this is a review site and I turned the subject back on itself? Tricky, right?)

As a new author, you dream of scads of praise for your work; of opening up your chosen publication or blog Of Record and finding glowing reviews dripping off the page. You want people to love your book or story as much as you do, to see and appreciate all the work and blood and coffee and countless nights/days/meetings-at-work-where-you-sat-in-the-back-typing-instead-of-listening that went into your prose. It’s only natural.

And here’s the thing: if you’re lucky, you’ll get some of those reviews. Somewhere, someone (preferably someone you don’t usually refer to as “Mom”) may go absolutely ga-ga over your work. You’ll be praised as the greatest genius since Heinlein, write the smoothest prose since Poe, be the next biggest things since…well, whoever is big in your corner of the genre that week. They’ll throw five stars up on Amazon and any place else they can, and tell all their friends.

But, as with everything, there’s an opposite end of the spectrum, and it’s there you’ll meet your challenges. There will be people who can’t stand your work, or find it full of flaws, or don’t see the point in it. And they’ll say so. And, being a writer and being invested in your work (and having access to Google, which you will search compulsively, but that’s another blog post…), you’ll read it. And it will, indeed, suck my friend.

Lesson Number Three: Reviews, like the Force, have a light side and a dark side. However, unlike the Force (or duct tape, for that matter), they do nothing to hold the universe together.

So who’s right? Well, both of them, in a way. Because–and here’s the important bit, so pay attention–reviews are opinions. Oh, they may be well-informed, or relevant, or well-meaning, or just plain crackers; but they are, at base, someone’s opinion about your work. And everyone’s opinion works for at least one person: them.

That doesn’t make reviews irrelevant, or course (far from it–sometimes there are insights or observations that bring up valid points about your work; and they do help people learn about your work); but it doesn’t mean you have to take every one of them to heart, either. And by no means should you ever take one as a personal comment on your worth as a person. Reviews are (ideally) evaluations of a piece of work, not of the artist. Sometimes you may not be so sure about that last bit–the web’s a wild and woolly place, after all, and electrons and the opinions they carry are cheap–so you need to armor up and remember…

Lesson Number Four: Some reviews may feel personal. Don’t take them that way.

But that’s not the main thing I want to get at here. For me, the most interesting part of reading the reviews of my first novel have been those that stray more towards the middle: the ones where a person may have liked the book to a degree, but were clearly looking for more/less of something. The reviewer may not even know precisely what this thing is, but you can often get a good idea through their comments about what didn’t work for them. Maybe they wanted a more sympathetic character; maybe your character wasn’t enough of a bastard; maybe they wanted to see more of the world; maybe you put in too damn many details about the world. Maybe (to pick a completely, utterly, not-related-to-my-book-AT-ALL random example) they just don’t like thieves.

And this is the part, as a writer, I find fascinating. I know damn well what I meant to do when I wrote a scene or action or an exchange of dialog, what I was trying for in terms of pacing or story-arc; but that doesn’t mean the reader is going to see the same thing when they read it. As writers, we spend so much time in our heads and in the story, we come to see it one specific way–our way. Even with revisions and critique groups and editorial input, ultimately what is on the page is what we pulled out of our brain and our guts: how are we not going to intimately understand what it’s supposed to mean? But once I send the story out? Once it’s in the reader’s hands and then in their head? It’s not my story any more. Oh, I wrote it, but I can’t control how they read it. The novel is as much the reader’s as it is the writer’s at that point, and by the end of the book, I’d argue it belongs more to them than it does to me anymore. All I can do is write the words; I can’t control how someone sees and tastes and imagines the story those words try to tell.

And that, I think, is the true secret to handling reviews as a writer: you have to realize that the story no longer belongs to you. Because no matter how hard you try, you can’t convey every detail and nuance and subtlety of the story to every person. And that’s okay. It’s why different people buy different books, and why one guy gives you one star and another thinks five isn’t nearly enough. Because, in the end, they each read the same book, but they also each read a different book; and neither one is quite the same book you wrote to begin with.

Final Lesson: When it’s done, you have to let the story go.

Now, enough navel-gazing. Let’s break a lamp or something so Aidan knew we were here. But I’m not paying for it.

Douglas Hulick is the author of the Tales of the Kin series. His debut novel, Among Thieves, the first book in the series, is published by Roc/Penguin in the United States, by Verlagsgruppe Random House/Heyne in Germany and by Tor/Macmillan in the United Kingdom and Australia.