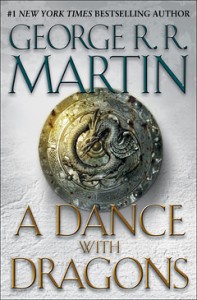 In the wake of Amazon.de leaking copies of George R.R. Martin’s A Dance with Dragons, Voyager Books, Martin’s UK publisher, has issued a plea to fans to do their best to avoid reading and/or posting spoilers for the heavily embargoed novel. 180 people received early copies of the novel. Of course, the Internet being what it is, spoilers are already out there.

We know that there are a lot of you out there.

We know that most of you, like us, have been waiting nigh on six years to crack open the cover of A DANCE WITH DRAGONS and dive back into Westeros to relish the adventures of our old friends Jon, Daenerys, Arya and Tyrion et al.

The wait is almost over – just 14 days and counting. But due to reasons out of our control, the embargo in Europe has been broken and a few US copies have been delivered to customers in error by amazon.de. Only 180 copies have escaped the embargo, but already there are spoilers leaking out.

And so, Voyager is asking you – if you can bear it – to avoid your favourite GRRM-related sites (except for George’s official site, and the Voyager site of course, where we will be screening comments as always) to ensure that the latest instalment of this epic story is not spoiled for you. You’ve got a remarkable journey ahead of you, and some stunning surprises, and nothing should come between you and that experience. The embargo is now being thoroughly enforced by all accounts and customers around the world to ensure that no more copies are sold early.

And we would also issue a plea to those 180 fans who have managed to get hold of a copy, to please consider all the other fans around the world who have to wait for the official 12 July pub date and save your spoilers!

Doubly interesting, neither Bantam Spectra (Martin’s US publisher) or Voyager are planning to lift the embargo on early reviews (which only the major, professional publications have had access to), likely put in place to avoid even the smallest of spoilers from leaking early. But, with the potential for the whole novel to be spoiled in detail by fans, why not go ahead and let the major professional venues post their reviews, a tactic that might lessen the flow of traffic to the major spoilers by intercepting those looking for early impressions of the novel?

So, will you bite on A Dance with Dragons spoilers? Or will you save your virgin eyes and fight tooth-and-nail to stay a maiden until July 12th?

Also, if you do have spoilers, I’d kindly ask that they’re kept out of the comments section here. If you want to discuss them, there’s a thread on NeoGAF.